Did you ever notice how much joy children exhibit when they’re really into creating a work of art?

Whether it’s chubby fingers smearing paint across butcher paper, or a more refined hands carefully putting the finishing touches on the ultimate Lego masterpiece — whatever the medium, expression through art is a natural, human need that most kids seem to wholeheartedly embrace.

But when we grow up, what happens to that free, joyous habit of artistic self-expression?

What about art for adults? Work. Chores. Bills. Kids. The daily stuff of life makes “doing art” feel like a luxury we grownups simply don’t have time in our schedules for.

I don’t know about you, but I miss it. I’m envious of my kids when I see all these magnificent projects they bring home from school. I want to weave yarn into abstract designs. I want to recreate Van Gogh masterpieces on canvas. Why do our kids have all the artsy fun? <End whiny rant>

I decided to stop being jealous, and start pursuing artistic self-expression in my own way — such as the fun fused art glass workshop my daughter and I did together last week.

I’m also seeking out art in my community, such as the WomenWorkBooks Collaborative Project coordinated by Jan Thomas. 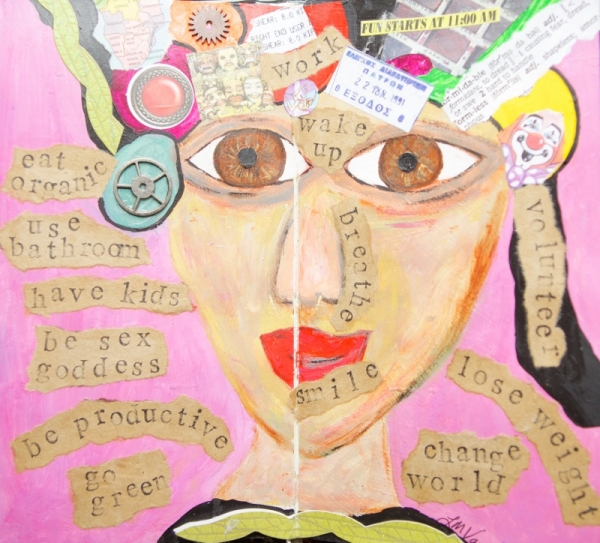 Three years ago, a group of 30 women artists from Art4Artists, a Cincinnati arts group Art4Artists (affiliated with the Cincinnati Recreation Commission/Clifton Recreation Center), decided to put their visual voices to work through the collaborative creation of altered art books. These books explored artist selected themes under the umbrella of women’s issues. The concept was straight forward. Each artist started a book with a chosen topic. The book was then rotated among a group of 10 women who considered the theme and visually interpreted their view on two pages of the book. Twenty-seven books were completed.

What began as an adventure has grown into powerful collective statements about women, what we think, and how we feel. We have been invited to share some of our discoveries about ourselves as women with you. Over the coming days different books will be showcased with the writings of the originating book artist. The ideas presented are at one personal and universal. It is our hope that you see yourself somewhere among the pages of these books and know that you are not alone.

I love this particular image from the project, part of Vivian Kline’s book, which she describes below: 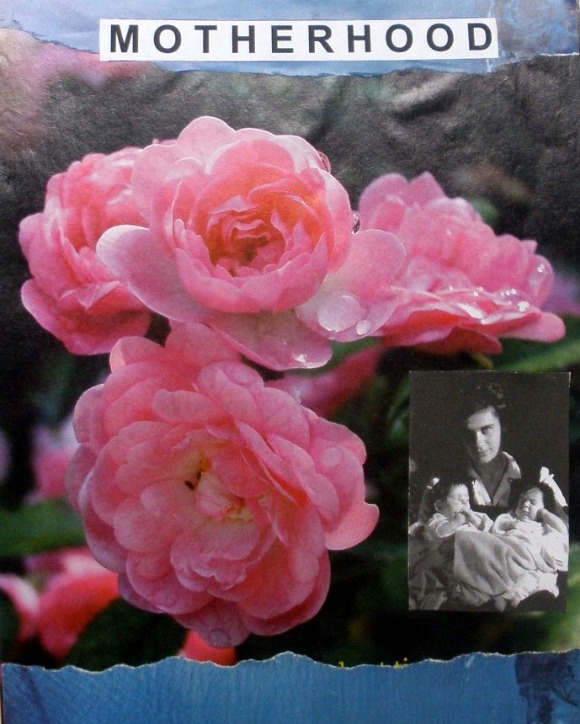 The most obvious difference distinguishing women from men is their housing the newborn in utero and perhaps that is why I chose “Motherhood” as my topic when we decided to make art books having to do with the role of the feminine gender.

For each book, the cover, first two pages and the back page is designed by the originator. On the cover pink flowers, the title motherhood and a small picture of me holding my twin babies made it obvious what the subject matter would be. On the back cover there appeared a very foreign figure holding a stylized fish-like papoose, which I hoped would make the point that motherhood existed far away from us. The first two pages included small many maternal cut-outs including an animal or two.

Nine other artists took different views of motherhood. Some included religious figures (Mary, Sister Teresa and a primitive figure with the baby in the womb). Then there was the idea of birth in general so that there were pictures of animals, butterflies, and birds, even Mother Earth herself!

Motherhood may not always be a loving relationship. There are creatures that eat their young. The horned owl will do that, perhaps to save the healthiest ones so that they can thrive. Some fish produce many eggs and swim away: for them, motherhood is a very short affair.

As the oldest member of this project, perhaps I am of the generation in which many were full-time mothers–at least until our offspring were in school, or even finished school. I was lucky that my interests beyond motherhood were those that I could combine with being at home. My husband was supporting of my having a studio (a room of my own!) even when in a small apartment.

When my three daughters had children of their own, two of them continued to work having found excellent daycare right away. They have always maintained that my third daughter had the harder job: staying home full-time.

Since making the book, I have learned there is a Museum of Motherhood at 401 East 84 Street in Manhattan. It was started by Martha Ray Rose in 2004. Classes are held on motherhood given by volunteers. There are global displays, poetry, lyrics, paintings are included. When next in New York City, I will certainly go visit! — Vivian Kline

For our Cincinnati area readers, the WomenWorkBooks Collaborative Project Exhibition opens March 8 and runs through April 19. For more information or to schedule a tour, please contact The Kennedy Heights Arts Center.

Do you have any artistic pursuits you miss—or have you found clever ways to make time for art in your busy schedule? 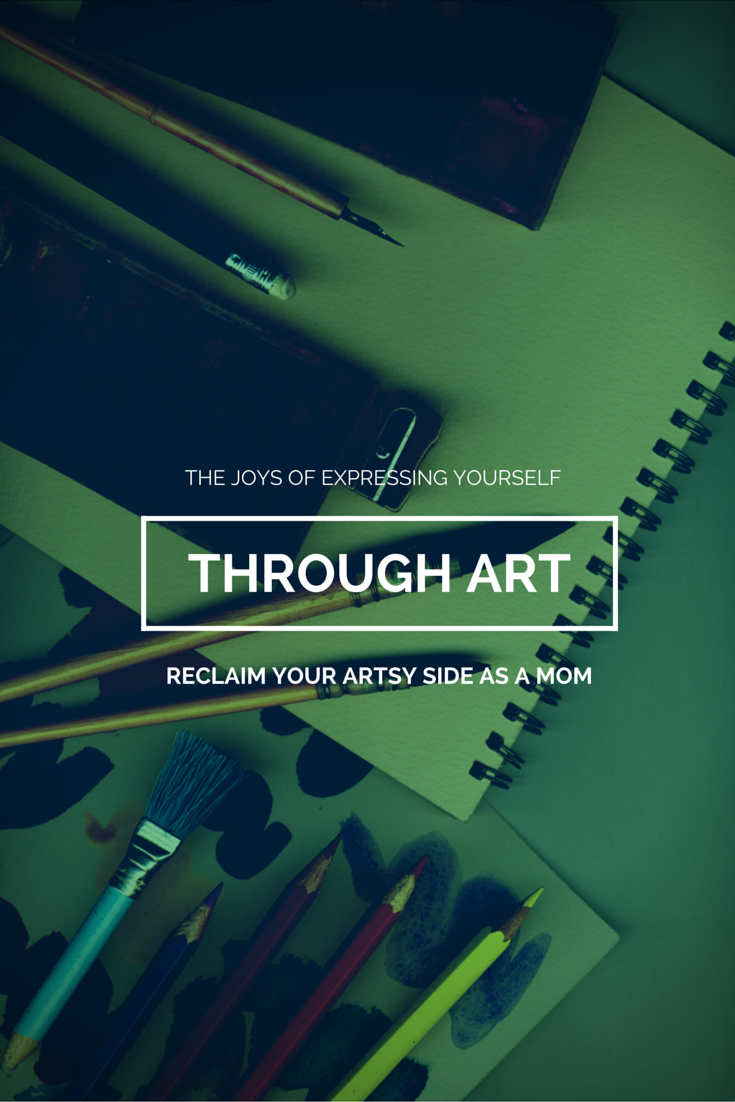 4 thoughts on “The Art of Self-Expression”