My oldest daughter, Autumn,* has wanted to be a dentist ever since she went to her three year dental clean. She’s four-and-a-half now, and she has had three additional cleanings, and this dream has stayed strong. As the person who is likely paying for her college tuition, I’m quite satisfied with this future dream. However, I also realize that it’s fairly unlikely that this will remain her career choice. I just love that at age three (and, really, even younger) she has begun thinking about her future dreams. I also love talking about this with her and her sister, Amelia.*

When I ask my youngest daughter (my two year old) what she wants to be when she grows up, she always answers the same thing; “A pumpkin!” she exclaims excitedly. I encourage her with this response, asking her if she would like to be a farmer. It took me quite a while to realize she has had this dream ever since sometime last fall and what she is really saying is that she wants to be a pumpkin for Halloween this year.

So, as it turns out, I have had one daughter that wants to be a dentist and the other wants to be a pumpkin. That is, until the other night when our power went out during their bath. I frantically lit a candle while my husband used his flashlight app on his phone. I then got the girls as clean as one can by candle and iPhone light. They thought this was an absolute blast. However, when they got out of the bath, they were not so sure. I will admit that even as an adult, it is pretty creepy when the power goes out. It’s eerily quiet without the hum of the lights or refrigerator, no sounds of the furnace kicking on. And even with candles and flashlights, it’s darker than we’re ever used to with no light at all streaming in the windows from the outside.

I would have loved to just curl up with the girls under a blanket at this time but my daughter has thick, curly hair that goes all the way down her back and it takes at least ten minutes to brush it out after a bath. My husband held a real flashlight up for me and the biggest shadow Autumn has ever seen came to life. She became more frightened and I somehow came up with a quick mom fib. I told her, ‘Wow! That is the biggest shadow I have ever seen! If you have a shadow that big, it means you can do anything you want when you grow up.’ I guess this is technically not a fib, since I believe we can all do whatever we want when we grow up, and we all have shadows that big.

As I brushed my daughter’s hair, I asked her to tell me her dreams when she grows up. She started with her consistent and practical career choice of dentist. Next, she said she wants to be a mom, something that has also been consistent. Then she added that she would like to be a fire fighter and a ballerina. What excellent choices and wonderful dreams to have, I told her.

Her sister came in the room after she finished brushing her teeth. We shined the light on her back and her shadow, too, spread across the entire wall. Autumn exclaimed, “With a shadow that big, you can be anything you want when you grow-up!” Amelia considered for a moment and declared her continued desire to be a pumpkin. But, that night, she also added that she wants to be a dump truck driver. This is one of her most beloved toys. 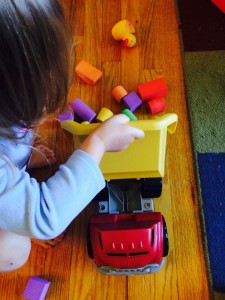 The next day as we were leaving, my girls stopped to watch five men working on a rooftop. I explained that the men were repairing the shingles on the roof. Amelia decided she most definitely wants to be a roofer as well. Later, while playing outside, Autumn began to draw with her side walk chalk. She decided to add artist to her dream list.

At no point did my girls remove a dream. They just kept adding more and more. My mind, always going to the practical adult I have become, couldn’t help to think that it might be challenging to be all of those things at once. But I, in no way, want to let them know that I have those thoughts. And maybe, it’s not so impossible to be all those things anyway. After all, there was once a belief that you couldn’t be both a mom and have a career. Well, we have certainly proved that wrong! And sure, it can be disappointing if our dreams don’t come true. But isn’t that risk better than not dreaming at all?

It got me thinking about something else too. I went to college and started my career as a registered nurse and I became a mom. But those were not my only dreams. I have so many more dreams. I want to advance my career by either earning certifications in a specialty I’m passionate about or getting my masters. I want to write a novel and have it published. I want to learn how to play the guitar, make pottery and maybe even take some photography classes. And so, so much more. But it can be really hard to think about fulfilling my dreams. Sometimes, it can be hard to even think about what dreams I may have. Often, my entire focus is simply getting everything done that needs to be done today. My dreams right now consist of getting a full nights’ sleep, reading a novel and taking my girls to an art studio to paint pottery together.

But wouldn’t it would be lovely to be able to dream as big a as a child? To have limitless possibilities where our dreams have no end. No worry about the number of hours in a day. No fret about the competitive world. No consideration of the challenge of making a high enough income to support yourself and your family.  No doubt or uncertainty of our talents or abilities.

As we all know, the above are a reality when fulfilling dreams. My daughter is eventually going to find out it’s not possible to be a pumpkin. And she may even change her mind on that one before next Halloween and won’t want to be one, even for a day. Also, nearly every dream my children listed is a profession. As a working mom, it makes me proud that they are already dreaming of their own careers. But I still expect (and hope) their dreams will continue to grow and expand beyond career choice. I hope they continue to have big dreams as they grow up. It’s a lot of fun to hear my girls think about the things that they might enjoy doing and I also love that it is challenging me to think about my own future dreams. Just because I have accomplished some pretty great things, it doesn’t mean I’m done dreaming. My shadow was just as big as my girls’ that night our power went out. Right now, it’s often hard to find the time to even do the everyday basic demands of life. But I hope, someday, I will have the courage to fulfill some of my dreams. And I hope I can always keep dreaming as big as a child.

*Names have been changed.

2 thoughts on “Dream As Big As A Child”