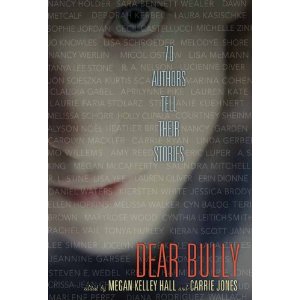 Bullying is one of my biggest worries where my kids are concerned.  It’s always been a problem but lately it seems almost epidemic, with dire–sometimes fatal–consequences. I find myself constantly on the lookout for signs that my school-age daughter is being bullied, or engaging in bullying behavior. I know what I’d do if I found out the latter: the hammer of negative consequences would come down on her with a wrath that could only be described as Biblical. As Tina Fey would say, “I will not have that sh&t. I will not have it.”

But what if she’s a victim of bullying? I’ve already witnessed my share of playground politicking, and it makes me feel, frankly, powerless. I’ve read lots of articles with tips about what to do–how to approach school officials, how to build up my daughter’s self-esteem. If and when I encounter blatant bullying, I will not hesitate to step in and protect my child. But as anybody who’s been bullied knows (and a lot of us have been bullied, right?), there’s a dimension to the experience that just defies any attempts at Making It Better.

I’m starting to think that one of the most important things we can do for young people is simply to let them know they’re not alone. That’s why I’m so excited to have a short story in a new anthology dedicated to this topic. DEAR BULLY: 70 AUTHORS TELL THEIR STORIES (HarperCollins) includes pieces by victims, by former bullies and by those who stood by and let bullying happen. It’s a powerful book, told from a variety of perspectives, and I hope it will be a resource both for kids and for those who work with and love them.

My piece, titled “Can We Make This Letter Disappear?” is a letter to my high school self, offering perspective and advice I wish I’d had at age 16. More than anything I wanted to communicate that bullying takes many forms. I wasn’t bullied in the classic sense – beyond some grade school boys who chased me home a couple of times, and the senior who told me on the first day of my freshman year that she was going to “kick my ass.” (My mom was a “will not have that sh&t” kind of mom, too – she had that girl in the principal’s office the next day, and the threats ended there.) I did, however, experience and participate in a good deal of “girl drama.” You know, gossip, rivalry, bitchiness–the kind of stuff that quietly chips away at a person. To this day I still feel the scars in the way I view friendships with other women. Girl drama is a form of bullying, too, and if my daughter ever experiences it — who am I kidding? WHEN my daughter experiences it — I want her to know she’s not the only one. That it does get better.

If you know a kid who is struggling with bullying, or if you work with kids, I hope you’ll check out DEAR BULLY. A portion of proceeds go to Stomp Out Bullying. And because I believe so much in this project, I’m going to give away one of my personal copies in a random drawing. Just leave a comment below – I’ll take entries until 10 p.m. EST Sept. 28. Please help spread the word! This is such an important topic and no child should have to face bullying alone.

8 thoughts on “Concerned About Bullying? I’ve Got a Book for You.”