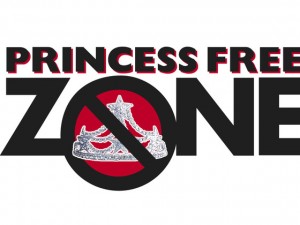 : a female member of a royal family; especially : a daughter or granddaughter of a king or queen

: the wife of a prince

: a usually attractive girl or woman who is treated with special attention and kindness

Little girl’s clothing emblazoned with the words “Princess,” “Diva,” and/or “Queen” make me want to hurl. Don’t even get me started on tiaras. Now, before you open your e-mail to send me a nasty-gram, or get the urge to egg my house, let me explain. My delightful 15-month-old daughter is loved, provided for, and made a priority in our home; however, she is not a member of a royal family, or the wife of a prince. It is debatable as to whether she is an attractive girl who is treated with special attention and kindness. Merriam-Webster definition aside, when I think of a princess, I think of a spoiled, ego-centric girl in need of saving. My thinking is largely influenced by television shows such as: Toddlers and Tiaras, Bridezillas, and My Super Sweet Sixteen. Most Disney movies don’t help the princess image either (e.g. Snow White, Cinderella, Belle, etc.) While there are some newer Disney princesses who fight for themselves, and work to solve their own dilemmas (e.g. Mulan, Merida, and Tiana), princesses are still by and large, beautiful girls/women in need of saving.

For those of you who are more visual, a few “princess” videos for you..

While being a princess sounds wonderful (beautiful, well cared for, and “saved” in sticky situations), it is not realistic. For most of us, the universe does not provide, on a continual basis, lavish gifts, attention, and assistance in times of need. I don’t want P to expect to get everything she wants; Chad and I hope to raise her to be thankful for getting the things she needs. We also don’t want P to think we are going to bail her out of every sticky situation she finds herself in. As much as we want to shield P from anxiety, pain, and upsets, we would be doing her no favors by failing to provide her opportunities to fall down, pick herself up, and move on. I will not be the parent making calls to P’s future teachers, begging them to let her re-take a test; I am trying not to be the kind of parent who rushes in with a band-aid and Bactine at the sight of a skinned knee. To some, that may sound unkind, but we simply want P to develop the skills to begin to advocate and/or care for herself, because when it comes down to it, you can’t always rely on others, but you can always rely on yourself.  We want P to be prepared for the harsh realities the world may thrust upon her. We want her to be confident in the knowledge and skills she has, so that when a problem does arise, she can attempt to tackle it herself, before she asks others for help. Finally, we hope that P does not become pre-occupied with her appearance. With all of the images in the media, this will surely present a challenge, but we think we’re up for it. We hope that as she grows, P relies on her intellect, curiosity, and kindness to navigate life, rather than her appearance. While there is no denyin’ P’s cuteness, it will only get her so far, and we hope she’ll put more energy into developing her mental/internal traits.

Now, while these are our plans, we know that our 15-month-old, rough-and-tumble tot could very well become a princess-loving, tiara-wearing, three-year-old. I’m told most toddler girls go through a “princess” stage. If this turns out to be the case, Chad and I will rent Mulan and Princess and the Frog, and hope for the best.

18 thoughts on “Don’t Call My Daughter a Princess”