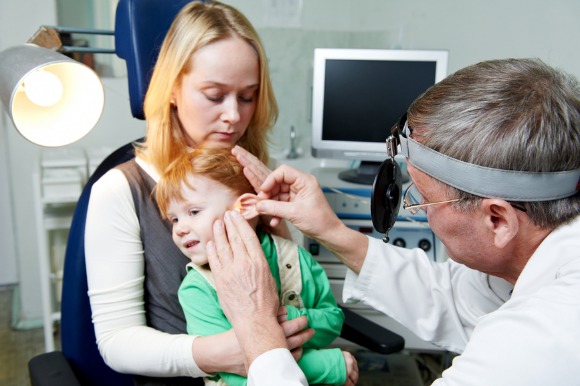 I’ve been “part-time” for about three months now, and I’ve spent approximately, um, ALL of my off-day Fridays in the doctor’s office confirming my suspicions that O (the letter, not the number) had yet another ear infection, or hadn’t recovered from the previous infection. At the last visit after a second course of antibiotics and a shot of antibiotics hadn’t knocked out the current infection, the pediatrician threw in the towel and instructed me to see an ENT to discuss ear tubes. So much for breastfed babies not getting ear infections.

I called the ENT O’s pediatrician recommended and couldn’t get in for a month. I thought it was regoddarndiculous that they would make a suffering 8-month-old wait that long to see someone. Since I suspected O was getting yet another ear infection (or still hadn’t kicked the old one—who knew?), I started asking around for other ENT recos. More than a few people reco’d Dr. Cotton from Cincinnati Children’s Hospital. So I called him up and got in at the end of the week. I was sold–by the fact that he got me in so quickly and because he was described as an international leader in the field of Otolaryngology.

So last Friday, O and I made my way to Children’s, maneuvered our way around the hospital corridors, and met with Dr. Cotton. His diagnosis was what I feared: O needed tubes. The Dr. saw a lot of fluid that was constantly becoming infected, and he suspected O’s hearing was being affected by this fluid, so he instructed O to get a hearing test.

The test was held in a small room with speakers in two corners. There were two women, one to distract O and another who went behind a darkened glass window to play sounds through the speakers. I held O in my lap and prayed he did well on one of his first real “tests.” My heart sunk every time he turned his head toward the wrong speaker. I almost started crying. We got another diagnosis that day: O had some hearing issues due to the fluid in his ears, but we were assured that once the fluid could drain properly (through tube insertion), his hearing would go back to “normal.”

From there we went to see nurse who explained all about the surgery—showed me the “tube” (a super-small piece of plastic that I’d never think to call a tube) that would be inserted in his ear drum, told me exactly why it had to be done, what to expect before and after surgery, and tried to calm my fears. She failed on that last part. Even though the surgery is only going to be approximately 15 minutes long, even though O won’t be in pain anymore, even though he won’t have to withstand any more courses of antibiotics, I’m still worried. It’s my little boy. He’s having surgery. He’s going under anesthesia.

Friday is his pre-op appointment and surgery is scheduled for Tuesday. J. will be out of town, so we’re on our own. I’ve rearranged my schedule next week so I can have the day of his surgery off, and be home the day afterward—even though people have assured me he will be good as gold as little as a few hours after surgery, I still want to be there for him as much as I can.

Another good thing I’ve been told about the surgery? Children sleep much better post-op. Good for O and his development, and good for Mom and her TV watching habits. Maybe I’ll actually be able to stay awake during Lost next Wednesday.