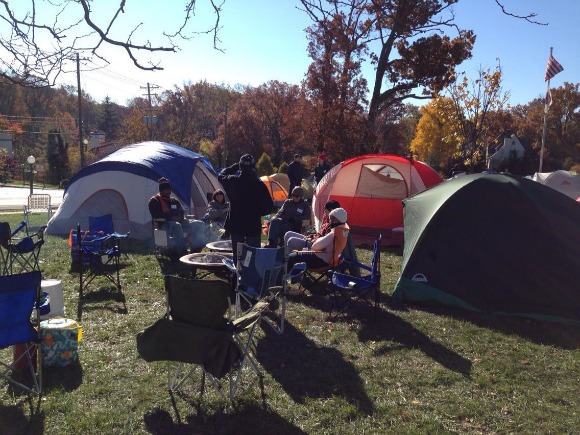 I have never been more grateful for my family friendly work schedule than I was on Monday morning, when I drug myself home at 7 a.m. after camping all night to get my daughter on a preschool waiting list.

You read that right – preschool. Now before you go puking into your coffee and ranting about overachieving parents who worry about the Ivy League before their kids are out of diapers, hear me out. I’m not a Precious Parent. We don’t live in a neighborhood where all the schools are great and I wanted this particular one because all the “best” people go there or its graduates eventually go on to Harvard instead of respectable state schools. I live in a city neighborhood where the public schools are in real trouble. Parents who can afford it either send their kids to private Catholic school or they move to a better district.

Well, we can’t afford it. This particular school is a magnet school, which means it’s still in the public school system, but has been able to rise above the challenges of the neighborhood by putting certain processes in place, demanding certain things of kids and parents, etc. Once you get your child into the magnet system, they can stay in for the rest of their schooling, and so can their siblings.

The preschool also is an all-day program. Working moms, have you found many preschools that are all-day? The ones in my neck of the woods all seem to assume that there’s a parent at home who can drop their child off at 10 and pick them up at noon two days a week. Pretty difficult, even on my more-flexible schedule.

So, we decided to do all we could to get our daughter into this particular school. Registration opened at 6 a.m. on Monday morning. Each class has a limited number of openings for children based on their gender and race (the school is mandated to reflect the diversity of the neighborhood). So if we wanted to secure a place for our white female three-year-old, we knew we needed to get there early. Early turned out to be 1 p.m. the afternoon before. And we weren’t even first in line. That honor went to the parents of another white female three-year-old.

We were lucky enough to get spots under the front door awning, out of the rain and sleet that fell pretty much all day and night. We sat on camping chairs, all bundled up, ate pizza, huddled around propane heaters, chatted, and waited, all the while watching more parents arrive and take numbers behind us. Around midnight, we pitched the tents that we’d stolen from our kids and tried to sleep in spaces that were meant for 2-year-olds, not 5-foot-10-inch adults. And in the morning, when they finally opened the doors, we shuffled in and filled out the paperwork.

Only to be told we had more waiting to do–the school would be sending letters telling us if we made it or not. So we packed up the car and I came home, thankful beyond belief that I didn’t have to turn around and go into the office for a full day of work. The friend who camped with me wasn’t so lucky.

And now, I wait. If our daughter doesn’t get into this school, I’ll be disappointed, but will explore other options, including trying again next year. If that doesn’t work, we’ll consider moving or look more seriously into private school. Until then, I’m really enjoying the opportunity to ease into the work week after such an exciting Sunday night!