My friends often hear me say that pregnancy, childbirth, and newborns are the holy equalizers of the female gender. It doesn’t matter how beautiful you are, how much money you have, or how much you’ve planned for your upcoming arrival—you have ZERO control over this life-changing experience.

Having struggled with my weight my entire life, I fully expected that as soon as I became pregnant I’d gain 100 pounds. I will never forget when I was 14 years old and puberty came on with a vengeance. I grew tall and curvy almost overnight. One day my mother said to me,”I hate to tell you this Miss, but with that fragile skin, you will definitely get stretch marks when you are pregnant.”

Instead, on the day I went into labor, I was SHOCKED. My skin was unmarked, I was only 23 pounds ahead of where I started. As an added bonus, it all came off and I was back in pre-baby jeans within three days of Kai’s birth. Thanks, Mom, for the 15 years of worrying about something that A.) didn’t happen, and B.) wouldn’t have mattered if it had!

During the pregnancy, I skipped right past morning sickness. I had enough energy to keep up weekly workouts with my trainer, kickboxing, and prenatal yoga twice a week. I traveled extensively with my job all the way to the end, and my husband and I even snuck in a trip to Mexico at 32 weeks. I wore that bikini proudly on the beaches of Puerto Vallarta! Sure, there were a few bumps along the way with my thyroid, aches and pains, but overall, I was DOMINATING this motherhood thing.

On June 26, 2014, I was 36 weeks 5 days pregnant and on a “spirited” conference call with one of my male colleagues when a felt a warm gush. At this point in the pregnancy, I didn’t jump to any conclusions but when the second gush came, I said, “Chris, I think my…I…I gotta go!” My first thought was, “He can’t come today, we have to be 37 weeks to have the birth center water birth I have so meticulously prepared for.” Second thought was, “Aha! I remember one early ultrasound where he was measuring ahead… surely I can negotiate with the midwives and they will make an exception to the rule for ME.” Turns out, I was wrong on both fronts. He was definitely coming and no, the midwives didn’t care how much sales and negotiation training I had. The answer was N.O.

Instead, we were off to Sharp Mary Birch for the hospital birth I didn’t want. Fortunately, I am pretty quick to adjust when needed and the hospital birth went beautifully. They still let me listen to my Hypnobabies meditation throughout my labor and deliver Kai naturally with ease and grace.

Then came the next step in the highly anticipated natural birthing process: the “breast crawl.” Your new baby is supposed to naturally make his or her way to your breast, latch perfectly and settle in beautifully for mother-baby bonding. This is where things really got off track. There was some scooting, I will give him that. But the latching and settling in—nope… not at all.

In an effort to get this child fed, I tried every possible pump, flange, and speed. No dice. We turned to donor breast milk for the first several days of his life. I had no idea how much my inability to nourish my own child would leave me feeling defeated and inadequate. Four days, five days, SIX DAYS post-birth and I was still hardly producing enough for one feeding. I finally got some great advice from one of the lactation consultants at Sharp Mary Birch. I watched Maximizing Milk Production with Hands On Pumping by Stanford University. With my newfound knowledge, I got a hands-free pumping bra, and got to “work.”

When people asked me if I planned to breastfeed my child, I don’t think I ever conceptualized what that would actually mean in real life. Becoming a 24/7 milk factory was not how I had envisioned new motherhood, especially hooked up to a machine. One day, I called one of my colleagues who was also a new mom. With tears streaming down my face, I said, “Who would have ever thought that feeding one TINY human would be more work than closing seven-figure deals?!”

The reality of maternity leave was settling in. I felt like a fish out of water. Away from my work, what was my IDENTITY? Without specific deadlines and goals, I turned milk production into my new job. I named them Daisy and Ursula and created competitions for which one would “produce” better results.

I was determined to keep Kai on breast milk until he was 6 months old. At 12 weeks, I started traveling for work. I became a master at pumping on the road, and learned to deal with all the hurdles that come along with it.

On one trip home from Denver International, my milk kept setting off the security alarm. The male TSA agent casually offered me the option of “just tossing it out” (insert primal rage here). Did this guy have any idea what he was asking me? A working mom who had pumped more than 90 ounces on a 2.5 day work trip? Waking up 45 minutes before everyone else and eating lunches in isolation so that my tiny human could still have the best shot a happy, healthy life for the years to come? HELL NO! You can do a full body pat-down and inspection, but I am NOT “just throwing out” all my hard work.

Around Thanksgiving, I came home exhausted from a work trip after a five-hour flight from Chicago back home to San Diego. When I walked through the doors, I was so engorged I didn’t even think to say hello to my husband and child. I just needed to get this milk out and go to bed. The next morning, my husband had some not-so-gentle feedback for me. Turns out, my guilt over making sure Kai was getting the liquid gold was actually preventing me from giving Kai what he really wanted from me—my love!

When I finally gave it up (yes, he did get six months—mission accomplished), I could not believe what happened to my body next.  Coming off the post-pregnancy hormones hit me like a ton of bricks.  Almost overnight, my thyroid went haywire, I gained 18 pounds, and my skin broke out in acne like a 16 year old’s worst nightmare.  I was so embarrassed, so ashamed.  I could not imagine how I was EVER going to feel normal again…

In that moment, I remembered the sage advice I received from one of my dear friends who put the entire experience very simply.  “Having a baby means nine months up, nine months down.”

By 9 months, we were sleeping through the night (admittedly with a LOT of  help from the Blissful Baby Sleep Coach, Joanna Clark http://www.blissfulbabysleepcoaching.com), and life had settled into a new “normal”.

Nothing about my experience is so incredible or heroic. This is just the norm, and it’s STILL hard. Really hard. My experience has left me holding a deep level of respect and acceptance for every mother owning her individual journey of motherhood, and loving her child in her own unique and perfect way. 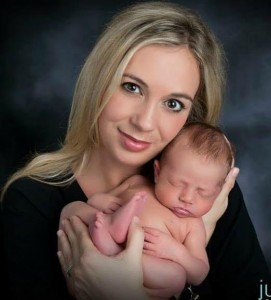 2 thoughts on “Pregnancy, Childbirth, and Newborns: The Holy Equalizer”