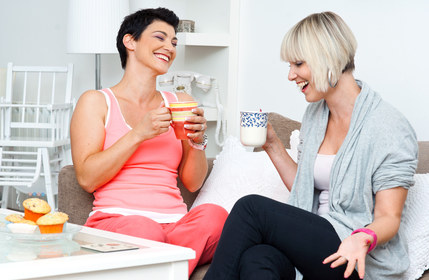 Infertility is more common than most people realize, and it can be difficult for happy, fertile people to understand how trying it is to struggle with conception. Not everyone knows what to say or how to respond when you say you have been trying to conceive for months on end with no luck. If one of your friends or family members is struggling to get pregnant, your words can have a big impact on the way they feel. Avoid using these common phrases when you are trying to comfort a friend who is going through a rough time. Instead, be sensitive and empathetic. Getting pregnant isn’t as easy as everyone makes it out to be.

Imagine how relaxed you would feel if you had been trying for more than a year to get pregnant, and your period continued to arrive like clock work. Simply telling someone to relax can actually make them feel more stressed and frustrated. Stress can contribute to fertility issues, as noted by Womenshealth.gov. Instead of telling your friend to lighten up, ask her if she wants to go out for a few drinks or offer to participate in a yoga class to help her keep her mind occupied on other things besides making a baby.

“It will happen when it’s meant to.”

Chances are you might make this statement in hopes of providing comfort for your friend, but more than likely you will make her feel like she doesn’t yet deserve to be pregnant. Fifteen percent of American couples struggle with infertility, according to the Mayo Clinic. Try not to trivialize the fact that getting pregnant can be difficult by saying fate will deliver a baby when it’s time. If your friend is venting her frustrations about trying to conceive, offer simple words of comfort such as, “Don’t give up hope.”

“Oh, it only took us one month to get pregnant.”

If you did not struggle to conceive, avoid describing your fertility journey as if it were a walk in the park. Your friend is well aware of the fact that many people are able to easily and quickly become pregnant, and she doesn’t need yet another reminder. Rather than talk about your own situation, help her find resources to assist her in identifying her fertile window with an ovulation calendar, measuring basal body temperature or monitoring cervical fluids. By charting her fertility, she may be able to become pregnant in a shorter amount of time, according to Web MD.

“Just take one of mine.”

Being a mother is exhausting, and you might be tempted to use this as a witty response to her struggles. This can be an especially painful thing to say to a woman who is hoping for a child, as she would probably love to be changing diapers and wiping up a messy face. Women who are struggling to conceive need support and counseling from their friends, according to Womenshealth.gov. Listen, and choose a more empathetic response, such as, “I’m always thinking of you.”

“Have you considered adoption?”

While adoption is a viable option for many infertile couples, it can be a process that is equally trying. Adoption agencies spend significant time screening potential families, and adoption laws vary by state, according to Womenshealth.gov. Instead of offering up adoption as a quick-fix to her difficult situation, simply tell her that you wish there was more you could do to help.

Kelsey Bell is a new mom and new blogger. She enjoys giving advice about frugal living.

2 thoughts on “You’re Not Helping: Five Things NOT to Say to a Childless Couple”