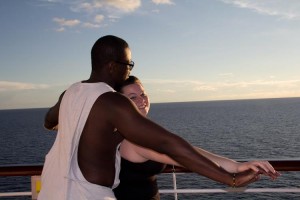 My daughter came to me in the past couple of weeks to tell me that her boyfriend was probably going into the military.  With that, she had decided that she would follow him wherever he had to go – and that they were talking of marriage.  Inside, of course I wanted to cry because I would miss her and life would change for all of us.  But, I also have always told my kids that I wanted them to see more of the world than the borders of Ohio.  I knew the day would come that I would have to really let go, but it doesn’t get any easier just because you know it is coming.

Lindsey has a good head on her shoulders.  I know she will be ok.  I am sure she will have ups and downs.  I am sure she will have happy times along with sad.  And I am also sure that home sickness will hit somewhere along the line.  I knew when she told me her plans that my response had to be “Lindsey, I want you to see the world.  That’s what I have wanted for all of you – to not let the borders of Ohio make you stuck.”  I also knew that I had to hold back tears and not cry because she had to know it was ok to make a life for herself.  That I couldn’t make her feel bad or guilty about a decision that I knew was hard enough for her to make.

Wow, being a parent is really hard sometimes when you least expect it.  Letting go has always been the hardest for me inside, but I have never let my insides affect what I knew were right decisions.  Sometimes, you have to set your emotions aside and think with your head – then deal with the emotions later.  I remember back to when my brother (now passed away) left for the military.  My mom had told my dad that she didn’t know how she was going to watch him leave without crying.  He told her that she had to cry or he wouldn’t know how much she cared.  I have no doubt that the crying part will not be a problem when it’s time for her to leave.  But man, I just know that when she takes flight, that girl is going to really soar!

10 thoughts on “Letting Go and Letting Them Fly”