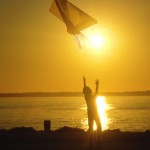 I stumbled upon Oprah’s “Fatherless Sons” episode the other night. It didn’t take long before I was in tears watching it. While it was talking with an audience of men that grew up without fathers, it also talked about the affect of parents on a person when they reach adulthood. One of the things that hit me in a profound way was the thought of the images we create in our heads about what our life should have been or would have been if things had been different. This struck me from many directions. Not only had I dealt with issues from an absent father, but I have dealt with issues that come with raising children alone.

I think we all have visions in our head of how we want life to be for our children. I would venture to guess that a good majority of women have a vision in their head of raising their children in a loving home with a husband in a nice neighborhood with a decent income and a comfortable lifestyle. Who wouldn’t want that?

Unfortunately, that vision doesn’t happen for many people – or it happens and it changes. I was with my ex-husband for 12 years. We had the home. We had the camper. We had the fenced in yard and the grilling out. We had what people expect for a family with kids. But we also had problems – lots of them. When the marriage ended, the dream in my head caved in. I have always told people who consider divorcing to make 110% sure they want it because if they aren’t that sure, the guilt will eat them alive. It is true.

I struggled for many years with the notion that I let my kids down. The guilt ate at me many times over thinking that my kids were being robbed of that two parent home. The guilt piled on top of me that my kids were forced to deal with poverty and the struggles that come with being a single parent with no college education. There were times when my kids and I sat wrapped up in blankets with a space heater trying to keep warm because our gas had been turned off and I would cry myself to sleep wondering why I couldn’t have the dream.

This show brought so many things back to me and it snapped me into a different way of thinking. To this day, I had still been carrying a guilt around for not being able to give my kids the dream that I had in my head. But that was just it! It was in MY head. I had to get to the place where I accepted the fact that the dream wasn’t what my life was meant to be and that it is ok. I had to forgive myself for believing in a dream and beating myself up for not being able to accomplish the dream I had.

In reality, the struggles we all went through built strength in each of us that we wouldn’t have gotten without them. The lessons I had to learn in my life just weren’t going to happen if I had continued on living the dream in my head. There were greater things in store for myself and for my children. And really – I see the fruit of some of those greater things even now, but I hadn’t noticed them as much until I took a look at things from the direction of letting go.

Letting go of a dream. It really is ok to do that and it doesn’t mean I was a failure. It means that my life was meant for a different purpose. That’s a big realization – and a big release of guilt off my shoulders. Whew!

Do you have dreams in your head that you are hanging onto that you should be letting go of? What are they? How would your life be different if you let them go?

PS. Oprah has a show about Single Mothers and their struggles coming this Sunday. If it is half as good as the Fatherless Sons show, you should tune in…especially if you are a single mom!

4 thoughts on “Letting go of the dream”