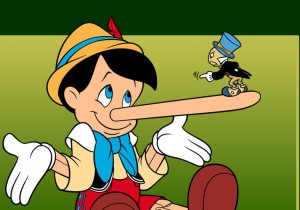 For most of my life I have believed people, even when they tell me something that borders on insanity. My favorite recent example came when a co-worker told me she was asked to model for Maxim Magazine. I can’t claim to be a loyal reader, but I think I would be forced to starve myself, get surgery and walk with 12 inch heels to try and look like their models. So when my 5’1, somewhat doughy co-worker told me she made the grade, I found it odd, but I expressed sincere excitement. When I mentioned it to The Hubs, he stared at me for a moment before speaking. “Dana.” Pause. “How can I say this without being mean…” He breathed. “That. Is. Simply. Not. True.  Why do you believe everything everyone tells you?”
It was a great question. Being married with two small children has only made me a bigger target for people’s absurd and absolute statements. No wonder we moms have guilt when the rest of the population makes outrageous claims such as these:

1. My kid(s) only eat vegetables for snacks.
First, my kids don’t only eat vegetables for snacks, and I find a bit of solace in that child stars don’t either. Sugar Freak
Second, grandparents. Those of us blessed to have them in our children’s lives also know they come with cookies, Dunkin Donuts, M&Ms, Reese’s Peanut Butter Cups, and Angry Birds Gummies. My own grandfather was a love of my life, but he also snuck me Fun Dip with abandon. He may have even slipped me a sip of bourbon when I lost my first tooth.

2.We have sex every day.
Think about that statement and how much creativity, stamina and sneakiness it would take to be true, especially if you have children.  I even asked The Hubs if he would try it for a week. His face read pure excitement, fear and confusion. He reluctantly admitted absolutely every day could get dicey.

3. We never have sex.
Yikes. Something I just read said if you are not in the mood, do it anyway. Yikes. With young children and a full time job, it can be easy to let this take a back seat. But a therapist once told me – I mean, I heard a therapist once said – in the end, letting go and abandoning the to-do list that constantly runs through the brain makes a marriage so much stronger.

4. Baby number two will ruin your body for life.
As a second child, I object to having this burden, and I will not impose it on my daughter.  At 40 and with two children, I accept change, but ruination??

5. I make all my kid’s food from scratch.
God bless you.

6. I would feel nothing if my husband or partner’s ex poked/winked/contacted him/her on Facebook.
Sure, nothing short of rage! Even if you put on a good front, most women are territorial by nature.  The best pic of you and the cutest of your children would be instantly featured.

Why are people, especially women, so afraid to tell each other the truth?
We feel the need to top one another when in fact, our vulnerabilities make us more likable and human. Stories of parental and female mishaps are fun to share, but point being in fun. There is so much we can learn from one another if we would stop comparing, criticizing and making extreme proclamations.  I wondered about my Maxim model colleague.
“Just wait,” Hubs warned. “If you ask her about it, she will claim the magazine was too racy and she had to turn it down.” A week later I didn’t have to ask. She told me so herself.

2 thoughts on “Lies People Tell Me”