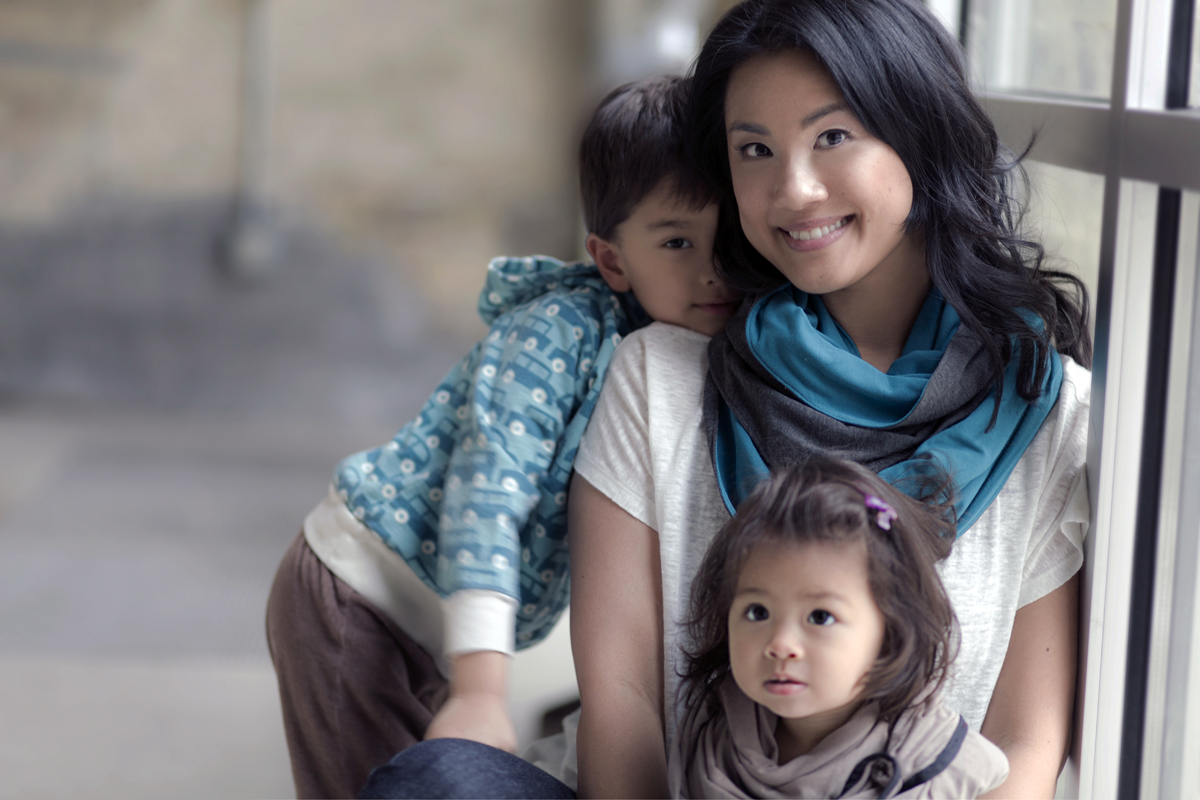 One of the best parts of being a working mom is getting to meet mompreneurs who inspire with their inventiveness, dedication and creativity. I met Angela Tsai on a project this spring and was fascinated, not just by her lifestyle, but by the business she’s created around a mom must-have of her own invention called the Mamachic.

The Mamachic scarf is a sustainably made fashion accessory, burp cloth and nursing cover all in one. It’s a way for moms to be stylish and care for their babies, while also being friendly to the environment. 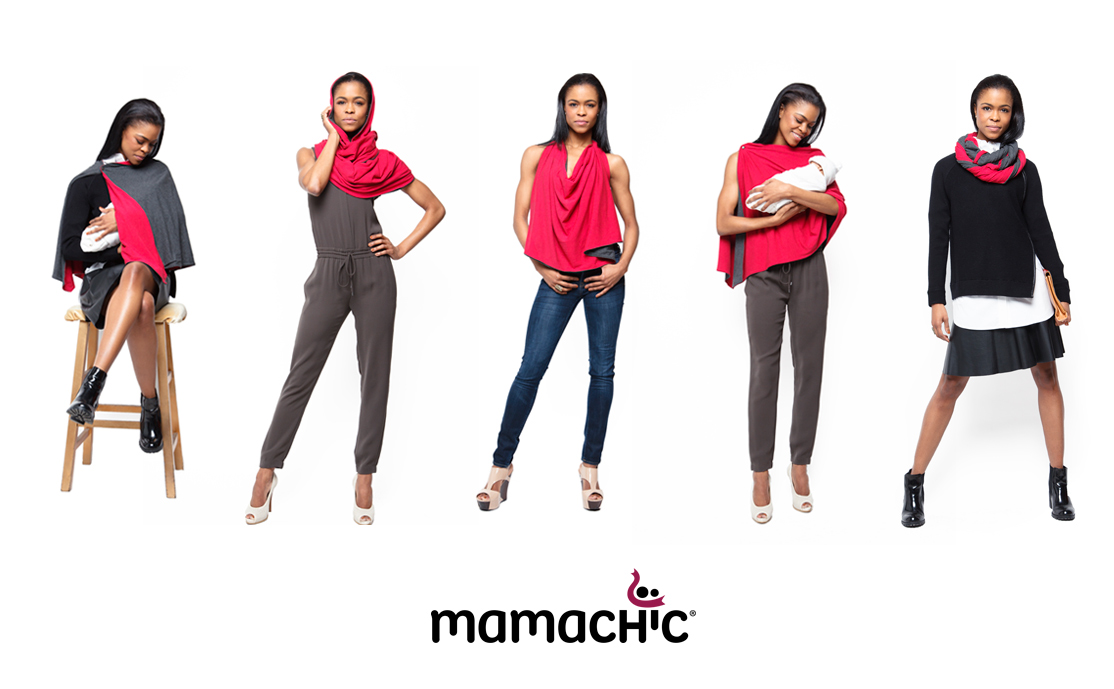 Angela runs her fledgling company as she travels the continent with her kids Max and Eva, and her husband, a performer in the touring company of The Lion King. That alone is super cool. But before sharing more about Angela, I want to spotlight the Mamachic because I think it’s perfect for working moms with small children.

The Mamachic is made of soft, breathable bamboo. It’s big enough to provide coverage while nursing and protect your favorite top from spit-ups. It can then be rolled into a scarf, transformed into a shawl—even used as a swimsuit cover-up. Strategically placed snaps help hold the Mamachic in place, whether you’re feeding Baby or creating a cute infinity look.

“Most burp cloths were like dish towels, and slipped off the shoulders or soaked through easily; many nursing covers on the market were utilitarian, looking like smocks or aprons. I also didn’t see many organic or sustainably-made options, and lugging around two different sets of fabric was often unwieldy in our travels. So during late night feeding sessions, bleary-eyed yet determined, my husband and I brainstormed designs to help us get through these first years of parenthood. We formed our company Too Cool For Drool, and the Mamachic was born.”

The Mamachic comes in a variety of colors, so you can match it with your favorite outfits. And just look at all the ways to wear the Mamachic.

15 Ways To Wear Your Mamachic from Mamachic Co. on Vimeo.

From Sportscaster to Minimalist Mompreneur

Angela’s career journey has been nothing short of an adventure. She started out as a web designer, then worked as an actor, TV host and sports reporter, making a name for herself as an anchor for NBA TV and the in-house sideline reporter for the Sacramento Kings.

Angela became pregnant around the time her husband landed a full-time job with The Lion King in Las Vegas. Soon after, he was offered the chance to perform with the touring company. So they packed up and hit the road.

Their lifestyle is minimalist by necessity. They’re only in each city for an average of four weeks, so they rent houses and live simply.

“(My husband and I) are a bit by the seats of our pants,” she says. “Less so now that we have kids, but we do have a fairly flexible outlook. We carry everything we own and we travel light.”

Once they designed the Mamachic, they jumped into the business with no experience in manufacturing or apparel. Angela calls it her “real world business school.”

Her commitment to sustainability led her to create the Mamachic with a rayon jersey blend derived from bamboo, which her research found is one of the most organically renewable resources on the planet. The Mamachic is cut and sewn at a worker-owned cooperative in North Carolina.

“This was an opportunity for me as we travel and raise our family to feel like I was being creative and to feel fulfilled,” she says. “I needed an outlet outside of my family, and I guess it’s ironic that this product and this business were inspired by my family.” 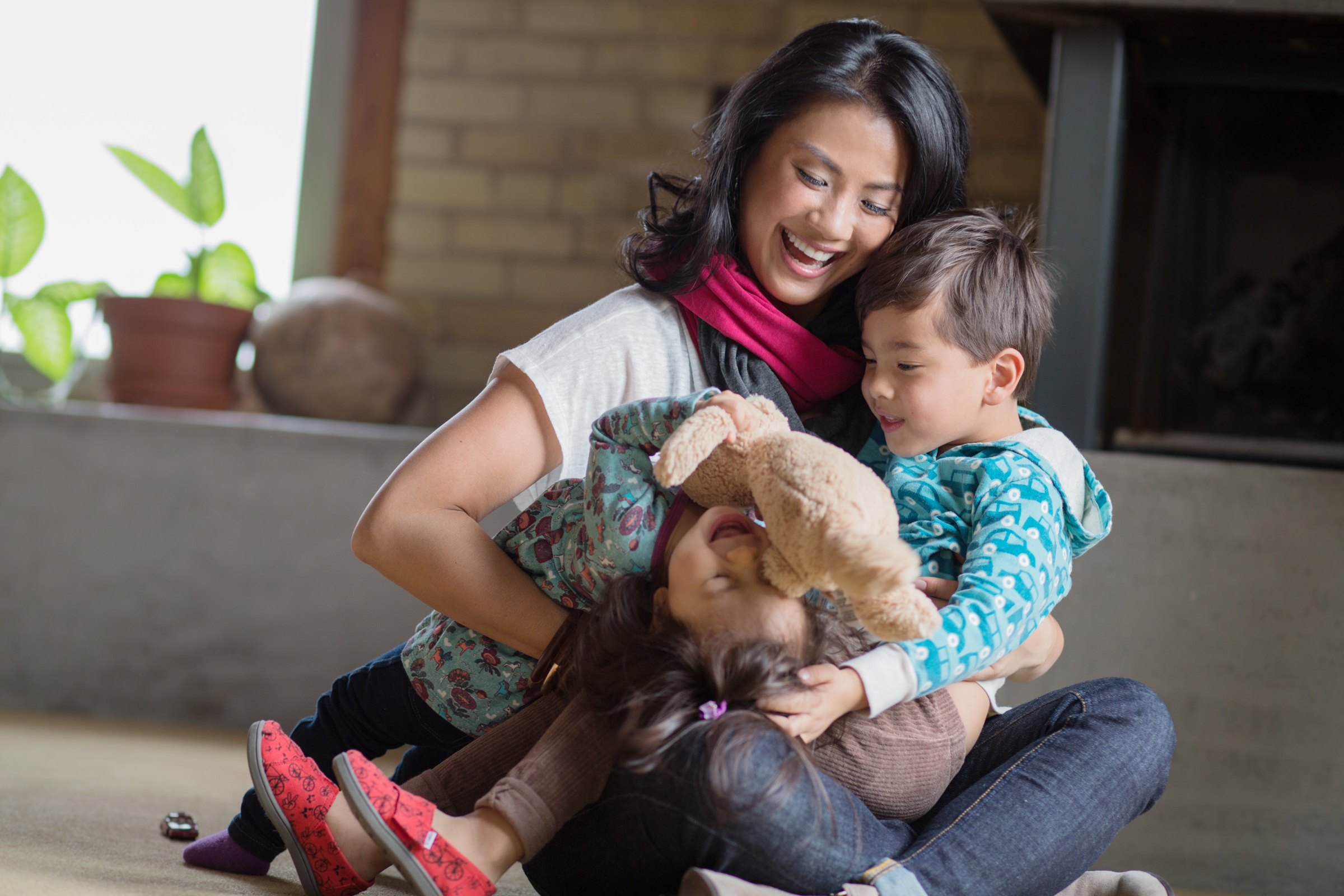 Angela is pretty much a one-woman shop, handling production and business details, plus updating the beautiful website she designed with blog posts on everything from fashion trends to talking with kids about race.

“I do have contractors and a summer intern, but right now it is totally just me, and the office I work out of is wherever I’m sitting or standing at the time,” she says. “It’s hard to carve out a routine because every four weeks we’re in our van moving, we’re unpacking, I’m touring preschools and daycares. Being a working mom and a work-at-home mom at the same time is overwhelming. You add moving, and it gets a little complex. You have to be in a multitasking, flexible mindset.”

A typical morning starts early with social media and a workout. Her husband watches the kids during the day while Angela camps out at coffee shops.

“I’m lucky because I do have my husband who is very supportive and who has a very easy schedule because he works at night,” she says. “But I still have to balance it so I don’t miss out on family time. We also have a great network of Lion King families. We have about seven that travel, so there are kids of all ages, and the families help each other.

“We fill our days. There’s never a dull moment.”

Since starting her business, Angela has experienced some exciting successes. The Mamachic has been featured in Forbes and Pregnancy magazine, and she competed in Good Morning America’s Shark Tank “Your Life” for the win.

Earlier this year, she went to the White House United State of Women Summit as reward for bring a finalist for a fellowship with Tory Burch.

“It was an amazing experience to be included in that,” she says. “All of this from just a little idea of a business I had—to be able to grow it to where I feel like my mission is something truly compelling and legitimate.”

But Angela is realistic about the challenges ahead.

“We’re still trying to grow for sure. We tweaked the initial product design and have just rolled that out. We’re trying to get into retailers, and I feel like we’re still finding our way. Everybody who has my product in hand loves it and wants to buy more and buy for their friends. I just need to get the product into more hands.

“The first thing I always tell people when they think they want to start a business is to ask yourself why. If it’s just to give you something to do or just to make money, I feel like that mentality will fizzle out quickly. You have to make sure you’re starting it for the right reason, and you really believe in what you’re doing.”

Angela encourages other would-be mompreneurs to be bold and band together.

“For moms, there is a lot of support out there. It’s easier than you think to form a network and get advice from people. Reach out to someone whose work you admire. People love talking about their work. It’s a wonderful new age of networking with social media.”

Above all, Angela says she’s learned the importance of being realistic.

“You’re not going to have the same path as someone else,” she says. “Take a step back and be kind to yourself and realize starting a business is like having another baby. Moms who start businesses have to play by a different set of rules, and those rules you have to make for yourself.”

Want a Mamachic for yourself or another mom? You can order right here.