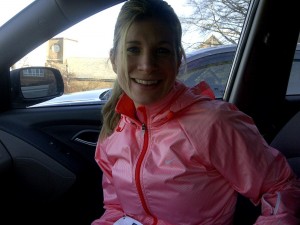 I have managed to find flaw with the most beautiful moments of my life. My wedding – my hair looked like a helmet. The birth of my children – I got fat. In the past, that sense of self esteem had led me to some bad decisions, bad relationships, and even bad friendships. Now, with my 40th birthday fast approaching, I decided it was time to free myself from any peculiar past hang ups and kick my birthday in the pants. So I signed myself up for a mud runner race. I had wanted to do one two years ago, after the birth of my son, Joseph, but since all of my girlfriends and my sister registered a puke face at the idea, I just didn’t. Now, after having my daughter, Charlee, I wanted to be the woman/wife/mother who just did.

Telling my husband went like this:
“Honey, mark the calendar. You, Joey and Charlee need to come watch me do the mudrunner.”
He glaced up. “Come again?”
“The mudrunner race. I signed up. This time I’m really doing it. By myself too.” ?Pause. He stared at me for a moment, then answered the way he always does when I have put him in a ‘position’. “O – kay.”
In times like these, Husband knows if he does not jump up and down with excitement, he is bursting my bubble. However, at the time of the race, our daughter would not even be three months old. My fitness level was not exactly at pre-pregnancy status. He measured his words:
“Did the doctor say it was okay?” Smart man.
I waved him off. “The doctor said I could do anything – even hang from a chandellier!”
As I began doing jumping jacks to prove my physical prowess, he raised his eyebrows. “I’d rather you do that instead.”

Fast forward to the race, and I was not what one would call super ready. The cute outfit I had saved from the race I never did required me to be a few less pounds, but that was the least of my problems. There was fire, there was freezing cold water, there were tires, ropes, bars, and there was mud. Everywhere- mud. And there was me. Half jogging, half hobbling to the finish line, I thought I might die. Then I saw them. My husband, holding Joey, and yelling and waving at me with pride plastered on his face. My son, clapping and yelling – happy to see me, but looking slightly nervous at his mother’s filthy state. Charlee was sound asleep in her stroller, but I could tell her a great story one day. They were the three best decisions I had ever made, and seeing them invigorated me. I raised my arms and (sort of) sprinted to the finish. I was tired, I was in pain, and I was undeniably disgusting. But in this moment I could not find a single flaw.