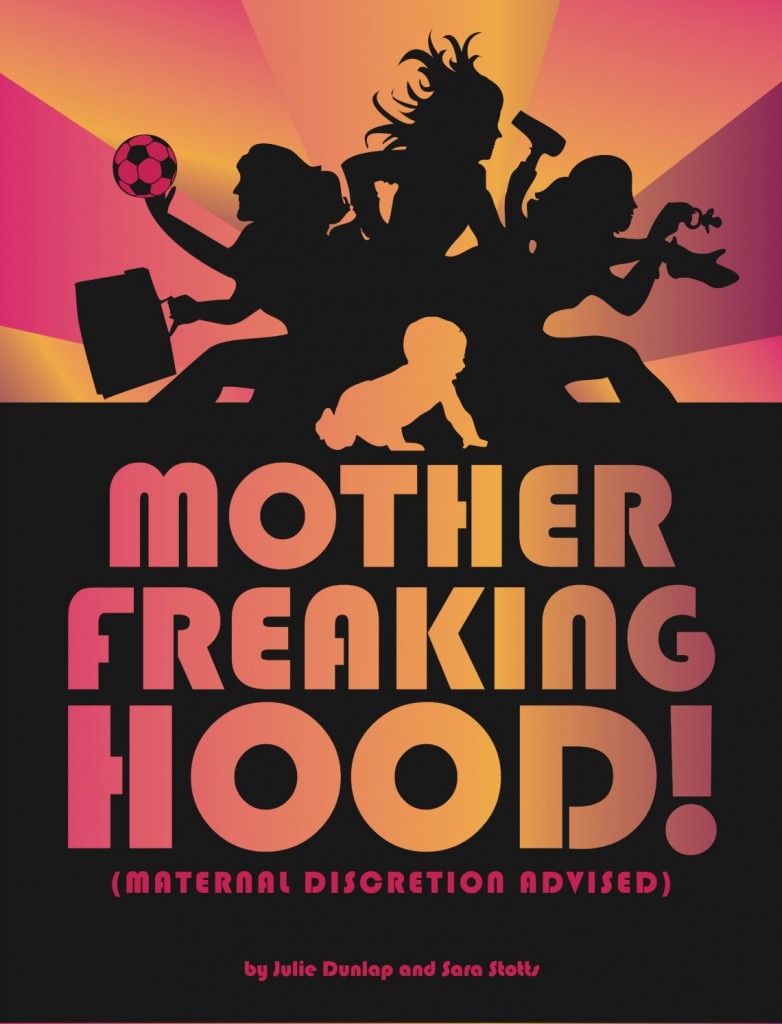 If you live anywhere near Kansas City, stop what you’re doing right now and get tickets to MotherFreakingHood!, a new musical about the joys and tribulations of… well, MotherFreakingHood. The show, which just happens to be written by two of my college sorority sisters, opens this weekend at Avila University’s Goppert Theatre, running through June 14.

Irreverent, raw and sentimental, MotherFreakingHood! follows first-time mom Rachael, second-time mom Angie, and fourth-time mom Marcia from pregnancy tests to empty nests. Bonding over Bumbos, PTA woes and teenage hormones, the trio find that motherhood is an adventure best shared with friends. For more information, and to order tickets, Check out the website. (You can get BOGO free tix for opening weekend with the code TEAMHOOD.) Want to see MotherFreakingHood! in your town? Look for links at the end of this post, and give it some social media love.

Back in college, Julie Thies Dunlap and Sara Stotts were fellow directors in our school’s legendary Rock Chalk Revue. Each year, Greek houses and dormitories at the University of Kansas team up to write mini-musicals that compete for coveted spots in the Revue, a fundraiser for the United Way. Those were crazy days, and I’m not surprised Julie and Sara went on to write a full-length show together. The fact that it tackles motherhood? Icing on an already super cool cake.

Here they are on Kansas City Live, discussing the show, along with a hilariously touching number at 3:36 about post-partum blues.

I asked Julie to share a little more about the inspiration behind MotherFreakingHood! She had a lot of great things to say, not just about the show, but about what creativity and companionship mean to busy moms.

WMAG Sara: I don’t even want to think about how much time has passed since we were in school together. What have you and Sara Stotts been up to?

Julie: Sara moved to Chicago to attend physical therapy school at Northwestern University, where she also started dabbling in improv and sketch comedy with the Annoyance Theatre and the Second City Theatre. She married a fantastic man, Bill Vellon, who never would have suspected he’d help Sara write two hit songs about motherhood someday (Bill has partial credit for “Go Mom!” and “Phamacology”). They have two children. Stephen is 7 and Laura is 5.

My degree is human biology – I used it to make four humans. Dave and I were married in 1994, and all four kids provided endless material for a humor column I wrote weekly for the Lawrence (KS) Journal-World from 2009 to 2012 and quarterly for Lawrence Kids Magazine from 2012 to 2015. Ellie just graduated from high school, Amelia is 16, Luke is 14, and Caroline is 12.

WMAG Sara: Tell us more about the inspiration behind MotherFreakingHood!

Julie: My kids were starting to tire of appearing in the paper every week, and I thought a musical might be a good way to get them off my back about it. With Sara in Chicago and me in Lawrence, we collaborated via a shared YouTube account, where we could record and send songs to each other, and semi-annual trips where we would engage in a three-way with Jack Daniels and write side-by-side.

After two years, we had a script and enough songs ready for a staged reading at the Lawrence Arts Center. I directed, Sara co-starred, and we played to a sold-out, wildly enthusiastic crowd. We were picked up for a 4-show run at LAC that fall. The show continued to evolve through a staged reading in Kansas City last fall and into this current production.

Here’s a clip from that Lawrence show – and a taste of the raunchy humor that has made MotherFreakingHood! a girls’ night out hit. (Consider using earbuds if you’re watching this at work.)

WMAGSara: It’s clear most moms can relate to MotherFreakingHood! Are there any angles that will have working moms in particular nodding their heads?

Julie: While the entire show is universal (and very, very raw and uncensored) truth – I don’t care if you are Princess Kate or Ma Ingalls, leaking boobs and seeing your daughter in makeup for the first time, thinking about your kid taking the car out and wondering if a boy is going to try to go up her shirt are pieces of motherhood that span region and class – working moms can especially appreciate the ways the three lead moms balance (sometimes successfully, sometimes not) their home and work lives.

Rachael is the quintessential Go Mom, rocking the to-do list from painting the extra bedroom to her work presentation like a superhero. Angie finds she has to rethink her definition of perfection when her work as a CPA coupled with some minor special needs of her children nearly break her (luckily, Mr. Xanax is there to save the day). And Marcia delivers a spot-on line in one of the early numbers where she loses her baby at the grocery store: “At work I can manage a staff of nineteen without everything ripping apart at the seams; how hard can it be for me to keep track of one thirty-pound kid without breaking my back?”

They find, though, that parenting really does take a village… and Red Bull (or champagne!)… and friends. Their cultivation of their friendship is as much a love song to the women in our lives as the show is a love song to our kids and our moms.

WMAGSara: That’s so important. It’s also important for moms to have a creative outlet, right?

Julie: Yes! Essentially, Sara and I found that writing a musical together, whether it be due to spending time with a soul sister or putting daily worries frustrations, hopes, etc., to music, was infinitely cheaper and more fun than therapy. It all passes so quickly — the good, and the bad — that we found solace in being able to sing our way through the tough times as much as we found a unique treasure in marking the joyful times with songs we can always come back to.

WMAGSara: What are your plans, hopes and dreams for the show?

Julie: We hope to have it published and picked up by a producer who will help us bring MotherFreakingHood! to cities nationwide. At some point, we also hope to make enough money at this to pay for the therapy our kids are sure to need after they hear their stories on stage. 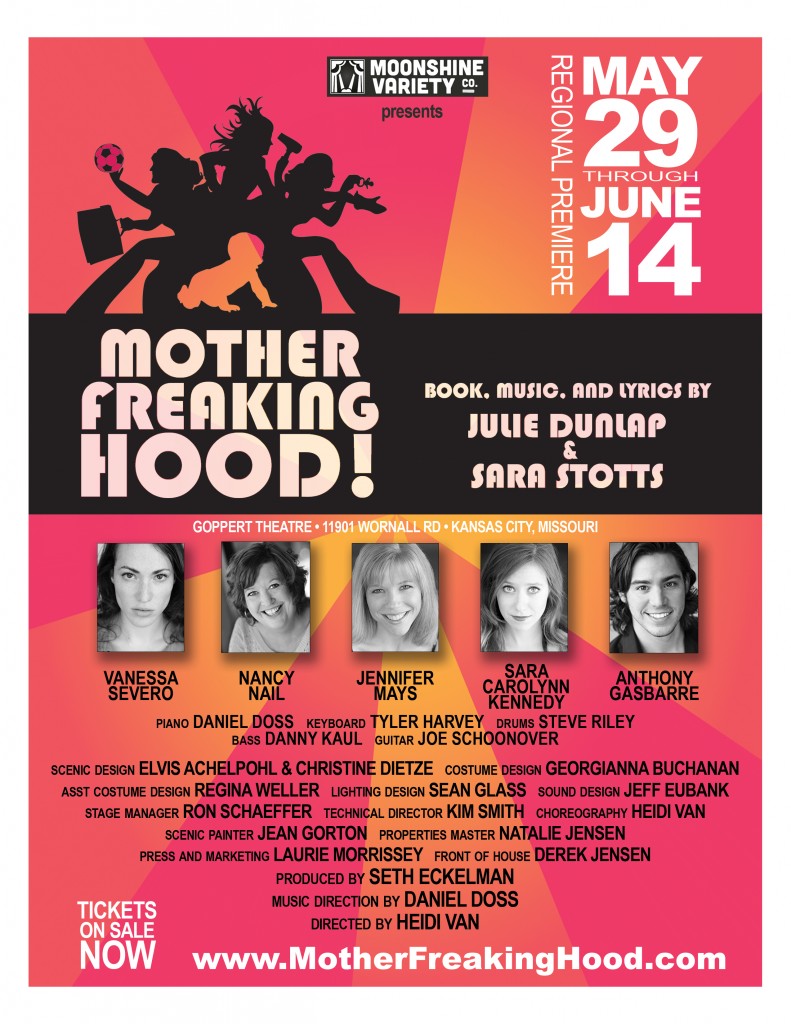