Not too long ago, I wrote about pet guilt. This was my own sense of guilt, entirely put on by me. Now that has changed. Recently, I’ve had a few situations where people have commented on my dog and made me feel guilty about the time I spend (or rather, don’t spend) with him. Dog judging. Can you believe it?

Situation 1: J and I were sitting on the front porch while O was inside taking a nap. Cydez, our dog, was with us. I was petting Cydez when a jogger started to come into view. Knowing Cydez’s propensity to sometimes bark at joggers, I whispered in his ear, “Settle.” He calmed down. Until the jogger ran right up to our front porch, reached down, and started petting my dog. “I just had to come say hi to Cydewayz,” she said. Cydez’s butt wiggled with excitement, and he did his signature four-legged dog hops up and down in front of her as she ruffled his ears and rubbed his snout.

“Who is this lady?” I thought “And how does she know my dog’s name?” Her visit was quickly over, and before I could ask who in the hell she was, she ran off, mumbling something under her breath. I couldn’t make out what she said, so I asked J. “She said, ‘You should play with him more,'” he said.

This lady was lucky I gave up running back in junior high or I would’ve tore after her. Who is she to judge me? What does she know? How does she know I don’t take my dog to the dog park every morning? I don’t, but I would if I could! I started to get all worked up, but J calmed me down some un-PC rationalization not fit to post on the blog.

Situation 2: My 110-year-old neighbor, Mary, recently asked me when was the last time I brushed Cydez. Cydez is part golden (we think), and he definitely needs a good brushing at least once a week. Do I always do it? Hell no. Some weeks I don’t even have time to brush my own hair. We may not look great, but we get by. I told her it had been awhile, and she clicked her tongue. “I could tell,” she said. Whatev.

: I was out front with O when a neighbor walked by with her dog. She came over to talk, and O started clapping excitedly, cooing at the dog.

“He just loves dogs. Cydez and O get along so well,” I said.

My neighbor smiled and commented that her daughter always got along with their dogs as well. “Cydez is so good and well-behaved,” she continued. I beamed with pride.

“He’s so funny, too, I always see him in your backyard running around playing all alone–having a great time. It’s like he’s made up these little games to entertain himself,” she said.

“Yeah, he’s funny like that,” I said, offering a half-hearted smile, feeling utterly defeated and racked with guilt.

I know my dog has become a second-class citizen in this household since my child was born. But he is just an animal. I still love him, just don’t have the time to dote and devote like I used to. I really don’t need other people trying to making me feel bad about it. So stoppit. Now. 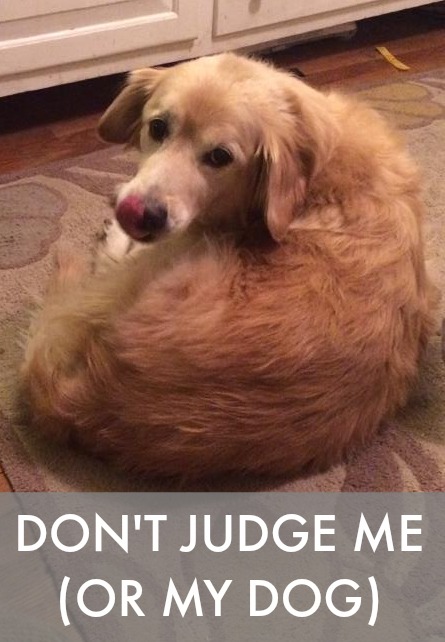 8 thoughts on “My Dog Is Fine! (Stop Your Dog Judging)”