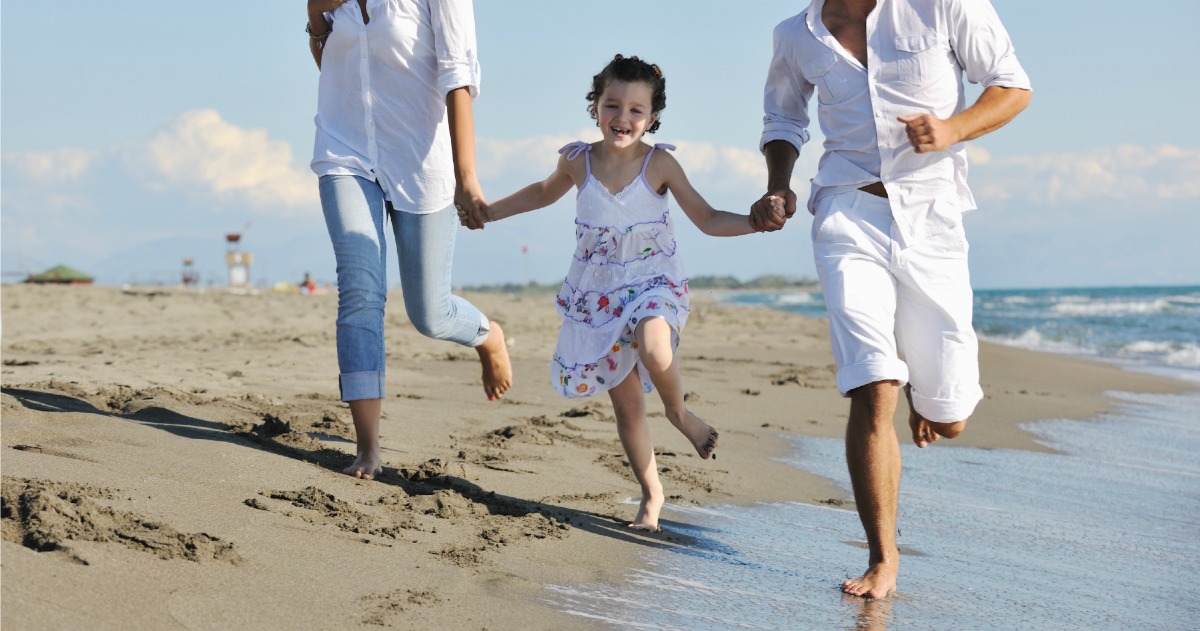 Depending on how I answer this question, I am met with a variety of reactions. People’s responses used to result in me feeling bad about our decision to have an “only child.”

However, since I’ve been fielding this question for nearly six years I’ve learned a few things and have come to understand why people feel compelled to ask you this and what they are really asking. 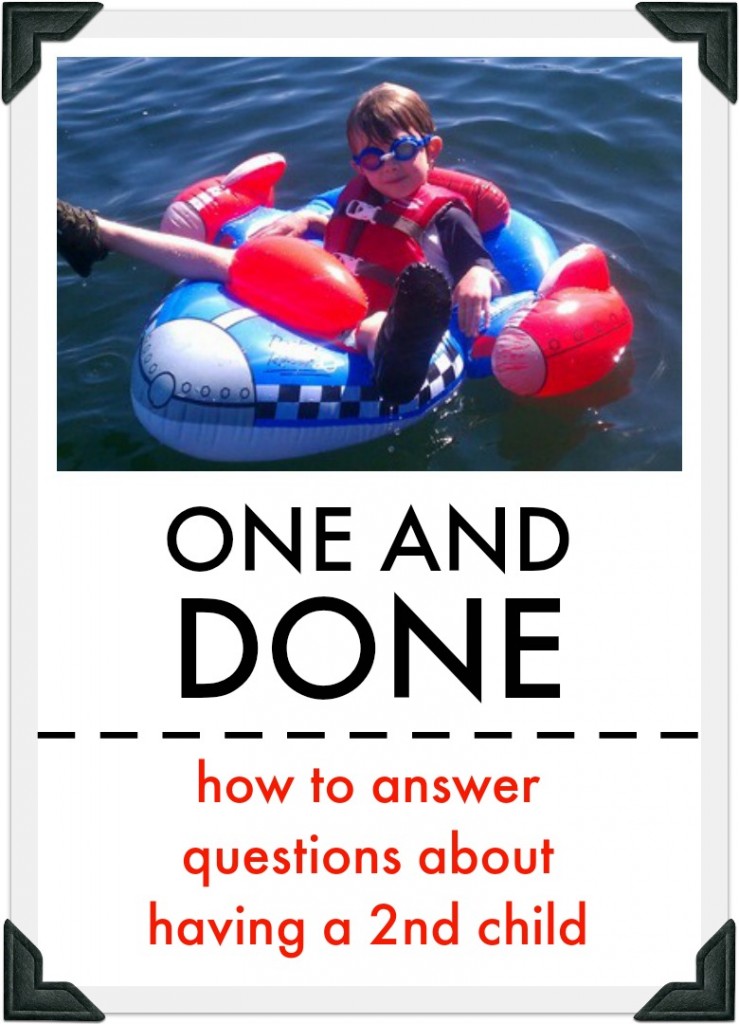 Let’s start at the beginning…

I never thought I’d have only one child. I always figured I’d have about three. My husband is the youngest of four and I am the youngest of two. A big family was something I’d always craved. When we got married we waited a few years to start our family. Once we looked at each other and decided it was time, I was pregnant.

My pregnancy was difficult and nothing close to the glamour they sell on the cover of Vanity Fair. Admittedly, I did love the idea that a little person was growing inside of me. Feeling the movement, hearing the heartbeat, getting kicked in the cervix and punched in the liver; I tried to take the highs along with the lows and just embrace it all.

Our beautiful baby boy decided that he wanted to come out early. Six weeks early. My water broke one afternoon while checking my email and I was put on bed rest for one week at the hospital. I had to lay flat for five days. I completely shut down to the outside world. My only concern was keeping my baby in my body for as long as possible. I didn’t want to see anyone. I was a mess and at the same time very calm and focused on my baby. The C-section was scheduled and we were going to have a premature baby.

The procedure itself was fine. The aftermath was not. They whisked my baby from the OR to the NICU through what looked like a drive through window and then I didn’t get to see him for four hours. A mother and a newborn should not be separated for four hours after birth. It’s cruel to both. Needless to say I was not a happy camper and was thankful when an empathetic nurse broke the rules and brought my baby to me. It helped but it wasn’t the same as getting to hold him right after being born.

Our son had to stay in the NICU for 11 days. I was discharged after 4 days. We had to carry an empty car seat out of the hospital. It was not the romanticized experience that I was expecting when we decided to have a baby. It was traumatic. For the next week while our baby was still in the NICU, I spent 12 hours or more there every day. I occasionally would go home to sleep because my husband made me leave to get a break. My only goal was to get my baby to meet the criteria he needed to go home.

When he did come home, it was great for a little while. Then I got a wonderful case of postpartum depression. I could barely leave my house for nearly two months. You couldn’t even ask me how I was doing without me bursting into tears. I had so much anxiety and trauma from his birth, I was terrified something would go wrong and he’d have to go back to the hospital.

Postpartum depression is a terrible thing to manage. It’s like having an out-of-body experience. You can see that you are acting irrationally but you have no control over it. This lasted for nearly a year. A year.

Then more fun came. My husband lost his job. This was in the time when the real estate bubble burst and he was working in the real estate industry. I was only working part time so I wasn’t in position to support us.

We went into survival mode and eventually sold our house because we were quickly depleting our rainy day fund. We moved into a tiny rental home and my husband continued to look for work. The unemployment rate was at an all-time high during this time period. Things were pretty rough. It took its toll on our marriage.

It’s hard to lose so much in such a short amount of time. We had this amazing child and it was difficult to enjoy our growing family. Everything felt like stress. We were both just maxed out.

As our son turned 2, things were getting a little better. That’s when people really started asking us if we were having another baby. I wanted to say yes but the thought of starting all over with another baby was way more than either of could even fathom right now. So we’d try and give a light hearted answer, “Oh maybe soon” or, “We’ll let you know when it’s time.” Our little guy was growing into one great kid and people would always bombard us with some version of the following:

“Why aren’t you having another one?”

“You guys make such cute kids!”

“He needs a sibling.”

“You’ll regret it if you don’t have another one.”

“You aren’t getting any younger.”

“Oh you can handle another one, it’s easier with two.”

“It’s like having two dogs; they’ll play with each other.”

“Only children are weird.”

“It’s not that expensive to have another baby.”

“You don’t want them to be too far apart so you’d better have one soon.”

And so on. Truthfully, most of these things my husband and I had already said to each other when we discussed it. It wasn’t that were hearing anything groundbreaking, I just couldn’t believe the nerve people had. It’s precisely why I didn’t want to share the name of our son until he was born. I didn’t want unsolicited opinions then and I certainly didn’t appreciate them now.

At first, I used to entertain people’s inquiries and let them know that we would like to have another but we are still working on recovering financially, we don’t have great insurance, etc. Then I’d go cry by myself because I did want another child I just didn’t think our life could handle it. The sad turned to mad after a while. I was annoyed with the audacity people had. How dare you ask me when I’m having another child – that’s none of your business, do you know how traumatic having this kid was? I’d start responding with, “Well you’ll be the first to know if we do” or, “When I look like I’ve put on 10 pounds, you’ll know.”

By the time we entered preschool (he was 4) we had pretty much decided another kiddo wasn’t in the cards for us. When a fellow preschool mom said to me, “Won’t you be so lonely at the holidays when he is grown? Don’t you want a full table of kids and grandkids?” I was so unnerved by what she said. It got me second guessing our decision. Would we be lonely? Should we have another baby in spite of the fact it would but so much stress on family and we couldn’t afford it, should we do it because that’s just what you are supposed to do?

The mom that said this to me has five children. The last two were twins and they were a surprise pregnancy. Her husband scheduled his vasectomy when he found out she was pregnant. She has since confessed she has nightmares about being pregnant again. I realized her statement to me about having more kids wasn’t about me at all. She was justifying the fact that her family would forever be gigantic (and a tiny bit overwhelming).

This is when things changed for me. I started learning that when people would ask me about having more kids and they found my answer unsatisfactory; they’d start projecting their values on me. If they had a huge family, they’d insist having more kids is the best decision. If they had kids that were close together they’d say well maybe I missed my window because having kids too far apart is not ideal. I started really listening to what they were saying instead of just reacting to it. I started to get smart.

I began to detach myself from people’s response. It started to anger me less and it didn’t make me sad anymore. Once I would answer the more kids question with a simple, straightforward answer like, “It’s just one and done for us,” I started to get more responses like:

“One is nice. I think we went crazy with the kids.”

“Your son is lucky because he will always have so much support from you guys.”

“It’s so much easier to manage just one.”

“You guys are smart to be so honest that you only want one instead of having more out of guilt.”

“We should have only had one, too.”

I’m not kidding; these are actual responses I got from people. They would even say these things in front of their multiple children!

What’s the moral of this story?

Guilt is a useless emotion. It doesn’t do anything but make you feel like you aren’t living up to someone else’s standards. If motherhood has taught me anything it’s that you have to be confident in your decisions and trust that they are right for you. Every decision has consequences good and bad.

Having one child works for our family. My husband and I learned that we are the best versions of ourselves when we have less on our plate. We figured out that we will be better parents to one child than we could be to more than one. We know that raising an only child has its disadvantages too. We work to educate ourselves on those obstacles and address them as they come.

There are no guarantees in life. You can’t guarantee that your kids will get along, that your table will be full at the holidays, that you’ll have the right number of children, or that you won’t regret your choice in the future. Disappointment is part of life. So is making tough choices. Having children is a decision that shouldn’t be taken lightly. Everyone has different things to take into account. It’s not always a simple decision.

The other morale of this story is to consider if you really need to ask someone if they are having a second child. If you do ask, be sensitive to the answer. There are many reasons people only have one child and they may not want to share those reasons with you. So don’t make them feel bad with responses like, “Oh you’ll regret it” or “You make such cute kids” or even with a “Why not?” People are never as simple as you would like to pretend they are. You will never know the hard road someone may have endured to have just the one. And it shouldn’t matter either way to you because you already have your two-plus kids so you’re all good.

To my fellow parents of only children: If you do get asked when you are having another kid, just keep it simple and say, “It’s one and done for us.” High five your co-parent and then tune the inquisitor out. Trust me, it feels great.

Nancy Arnold is a Seattle Washington area blogger and marketing consultant for luxecards.com. She lives with one husband, one son and one cat. She enjoys reading, blogging about motherhood and work balance as well as marketing for small businesses.

79 thoughts on “One and Done: For Parents of an Only Child”