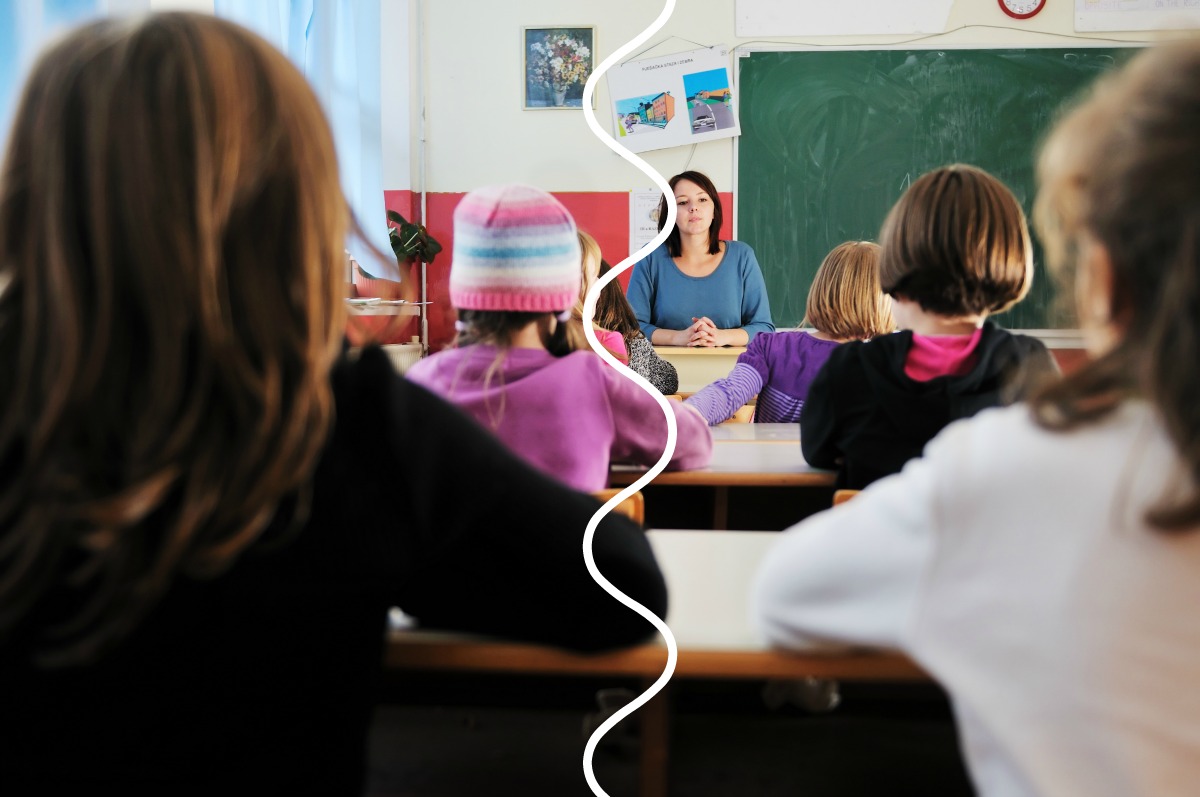 This is a story of a friend and the issue of politics in the classroom. She’s a successful working mom to two kids—a first and third grader.

This story involves everyone’s favorite (or least favorite topic) these days: the presidential election. I’m grateful she’s sharing her story, and I think you will be, too.

Because I believe these things should be private, I’ve agreed to keep her identity under wraps.

Your daughter, in the first grade, comes home from school and drops some big news about her day. Tell us about what went down.

Our daughter comes home from school and says, “Today, my teacher told us to go stand on one side of the room if your parents are voting for Trump…and another side for Clinton.”

Wow! What did she do?

She actually went to the middle of the room and refused to pick a side. I used it as an opportunity to tell her that there are many Americans who are “undecided” in this election and what that means.

What a brave little girl! How did she handle it?

I told her that I was proud of her for not taking a side. She told me, “I don’t understand it all yet, Mom.” And of course, she doesn’t!

She not only went to the middle of the room—and was the only one who did, but stood tall and pointed at the other sides challenging why she couldn’t stay in the middle!

She stood in the middle—because she said she doesn’t know enough.

How did the teacher react to her standing her ground?

When my daughter chose the middle, because she didn’t have enough information to make a decision—the teacher told her this wasn’t an option. Interestingly, though, when asking the teacher who she was voting for, she said, “It’s private.”

Will you be having a conversation with the teacher?

Yes. Although we talked about government, civic responsibility, and voting in school, I’ve never had a teacher ask who my parents supported or what my own personal views might be.

Did you ask other parents what they thought about this?

Of course! Raising kids takes a village, and I didn’t hesitate to ask my friends what they would have done. They responded saying they’d be livid and the teacher crossed a line. They said it was inappropriate, terrible, strange, and unacceptable.

I agree that educating kids about the election is important, but I question why in this manner. What was her intent? I’m hoping it was just a case of bad judgment.

Sooo…. who is your daughter’s class voting for?

My daughter was able to tell me which side all of her classmates were on. That bothered me. I tried to talk about what a democracy is and why we’re lucky to live here and have that freedom. I’ll just say they’re all leaning to one side.

How do we keep our kid’s values intact at the same time we’re trying to instill them?

Good question. It’s challenging, and we’re embracing the challenge. I want my kids to have their own minds and form their own opinions—which may differ from mine, and that’s okay!

What would you tell your son or daughter if they came home with this story? Leave a comment and let us know.

1 thought on “Politics in the Classroom”