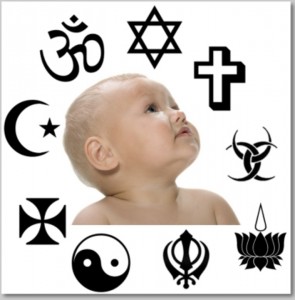 I don’t believe in God. There, I said it. It’s not that I haven’t tried; believe me. My family didn’t go to church while I was growing up, but I did attend (off and on) for a period of about three years, with a Christian family in our neighborhood. At their churches (we attended two over the three year period),I attended youth group, participated in discussions, prayed, and sang songs. The pastor of one of the churches even came to my house one day, and I “was saved.” I put myself on a year-long independent Bible Study course, and prayed daily. From the beginning it felt forced, but I continued trying to believe, trying to feel something. Then, at the age of 14, I decided I couldn’t force myself to believe something that I just didn’t. When I prayed, I felt like I was talking to myself; I never felt connected. I’m a skeptic by nature, and having faith in a God does not gel with my need for evidence and facts. Until now, I’ve been pretty tight-lipped about my beliefs. Growing up in a small town, the people who did know what I believed said some pretty nasty things: “You must hate Him,” “You’re going to hell,” “You’re a bad person,” etc.  I didn’t know how to respond to those remarks as a youngster, and was often rendered speechless. I was stunned by their quickness to judge my character. For the record, I do not hate God; it is impossible to hate something/someone you don’t believe in. I suppose I could hate the idea of a God, but I don’t. On the contrary, I think the idea of there being an individual who oversees things and has a plan for everyone is comforting, I just don’t believe it. If I am wrong, and there is a God (and an afterlife), I would hope that He/She has seen the way I lived my life, and shows mercy. Being agnostic (I guess that’s what I am- I don’t believe, but feel that there is no way to know for sure) does not take away from the fact that I treat others the way I’d like to be treated, help others when I am able, and do my best not to pass judgment on others.

Now that I’m a parent, I think often about how I will answer P’s questions about religion, life and death, and holidays. I haven’t worked out the exact dialogue, but I plan on telling P that there are many different beliefs about all of those things. If she expresses curiosity about a certain faith/religion, I will explain to her what I know about it (if anything), and do my best to connect her with a family member, friend, or member of our community who can answer the questions that I can’t. My biggest fear is that P (at a very young age) will ask me what I think happens when we die. I believe in being honest with children, so I will tell her. I think that our bodies stop working (we don’t see, hear, taste, smell, speak, etc.), we become part of the earth, and we live on in the memories of the people who love us. I will stress that “what mommy thinks” is not what everyone thinks, and that “mommy doesn’t know for sure.” That said, young children tend to take what their parents say as truth, so I am still a little anxious. I don’t remember asking my parents directly what happens when we die, so maybe P won’t either?

The truth is, I don’t care if P decides to become Christian, Jewish, Buddhist, Quaker, Muslim, agnostic, atheist, etc. If believing in a God or Gods gives her peace and comfort, I will support her. P’s faith (or lack thereof) is hers to decide. My only expectations are that she remains open-minded, respectful of the beliefs of others, and does not think that her way of thinking is the “right” or “only” way. I want her to understand that you don’t have to believe in a God, or be part of an organized religion, to be a good person. That one only took me 12 years.

8 thoughts on “On Religion and Parenthood”