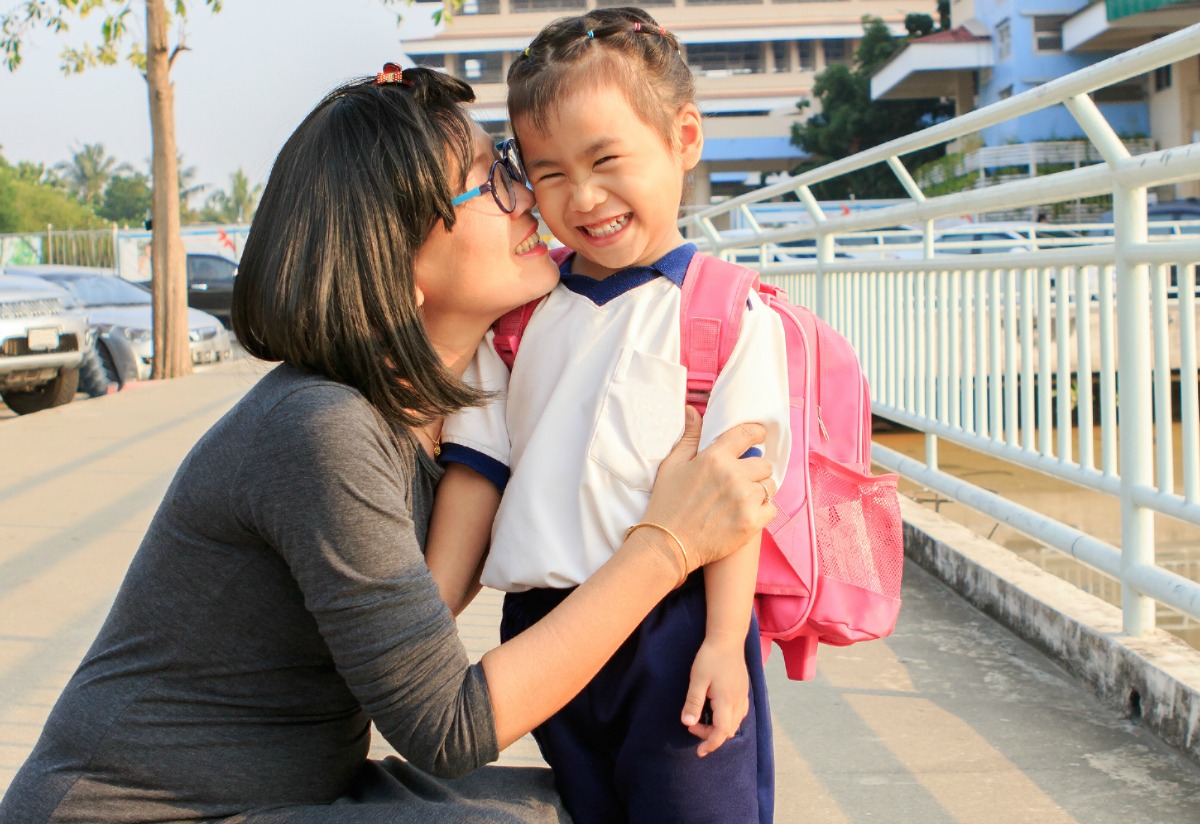 That first year of motherhood, I truly thought things would get a lot easier as time went on. Taking care of a baby is time consuming and demanding. It is intense; new emotions and sleep deprivation to the max. Surely, things would get easier when my kids were a bit older. More specifically, I thought school age will be easier.

The first year was a roller coaster of emotions mixed with unbelievable exhaustion. My alarm was set for sometime in the 4 a.m. hour. On those early mornings, I got in snuggle time while breastfeeding and then laid my sleeping baby back in her crib. After getting a quick shower in the still-quiet house, I was ready to head to work. But not before I placed a gentle kiss on my sleeping baby’s soft hair. Settling into a routine happened easily enough but I remained torn between my need to work and my need to be with my baby.

It’ll be easier when she’s in school. I’ll go to work and she’ll go to school, her “work.”

That first year went by in an odd combination of slow motion and lightning speed. Mornings with breastfeeding snuggles ended. Quiet showers were replaced with the chaos of trying to get an uncooperative toddler out the door on time. Intense separation anxiety started. My one-sided kiss was replaced with the need for long hugs and reassurance to my sweet child that I would see her again after her afternoon snack.

It’ll be easier when she’s in school. She will have her place to go and she won’t feel like I’m leaving her.

Just before that second year began, I gave birth to my second child. That’s around the time the constant illnesses also began. I actually considered myself quite lucky to have gotten two years in with minimal illness. But then I was experiencing payback, because it seemed like the illnesses never stopped. One child would get sick and then infect the other resulting in crazy amounts of time off work. Inevitably, I then got sick. More time off work was required. My PTO bank vanishing before my eyes.

It’ll get better when she’s in school. Her immune system will be stronger and they always say a daycare baby has fewer school absences.

Week after week, I wrote check after check. Despite knowing full well the cost of day care, I was still shocked by the year-end payment summary. I fantasized about a time when I wouldn’t have this expense, this bank-account drainer. What would I do with the money? A family trip. New furniture. Heck, maybe some new clothes for myself since most of what was hanging in my closet was pre-baby when I had the money and time to shop.

Certainly, this part will be much easier when she’s in school.

My biggest little kid is headed to kindergarten in just a few days. I will officially have a school-age child. Sadly, the word easy is not coming to mind. Not at all.

I have two children who move slower than snails to get out the door. If we don’t get out on time, it won’t just be me that’s late for work, having to provide an explanation to my boss. But my daughter will be late and need a note for the principal.

Her fears of me leaving have not disappeared. In fact, they are intensified because she has anxiety about all of the unexpected of this new school.

Illnesses aren’t going to disappear entirely no matter how much exposure she has. Even if they did, they are still replaced with time off work due to in-service and snow days. Not to mention crazy long holiday breaks.

And those checks. Those aren’t going to stop. This is especially true for us because we decided to enroll our daughter in private school. The biggest dictator of that decision was our public school only offers half-day kindergarten. Three-hour days just weren’t a feasible option for our family. Even if you don’t have tuition like us, most families are still working longer hours than their child is in school. There’s before and after school care. There’s school supplies and school uniforms. There’s (non-optional) fundraisers and Scholastic book club. There’s after school activities which come with more fees, more uniforms and more fundraisers.

Then, there’s also homework. A world I haven’t even begun to imagine.

Easy, it will not be. It’ll be brand new. There will be a learning curve for both parents and children. It will hold its own unbelievable challenges and at the same time be a downright amazing adventure. And even though I know it’s not going to be easy, I am thrilled for my daughter to be entering this exciting new stage of life.

8 thoughts on “School Age Will Be Easier”