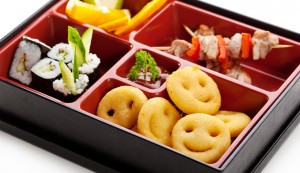 So I’m writing a Tasty Tuesday post at the END of Tasty Tuesday because this Tuesday was filled with meetings and deadlines and making arrangements for the kids to do summer stuff tomorrow while I’m working — basically your typical Tuesday. And I’d planned to talk about some casserole that I like to mix up after a day like today. Or about some sort of sandwich that I toss together for the kids while I’m working from home and they’re trying not to bug me because they are off for the summer and I am not.

Then, I started watching YouTube videos, which often is how I unwind at the end of a stressful day. I started out with some demos of these really fascinating Japanese candies. Not sure how I stumbled on those, but they were mesmerizing.

And then, I hit the motherlode of Tasty Tuesday-esque Mommy Guilt: Videos of people assembling bento boxes.

If you haven’t heard of the bento box, it’s basically a Japanese lunch box. Japanese moms pack bento boxes for their children each day, and let me just say that a PB&J, apple and bag of chips would NOT cut it. Apparently, it is a requirement for bento boxes to be adorable and artistic and ABSOLUTELY AWESOME. I’m talking rice molded into the shapes of panda bears with carefully cut out eyes, bows and other cute features, vegetables cut to resemble flowers and other aesthetically pleasing shapes, and on and on. This video shows you how to make a Hello Kitty bento box. The tiny pieces and attention to detail are absolutely amazing.

I would LOVE to try something like this. I think I would probably fail miserably at it.

And I feel a little guilty that our culture doesn’t embrace more of this kind of thing. I remember hearing an NPR piece awhile back in which an American woman opined that packing bento boxes each day encourages parents to slow down and put a little more love into the food they serve, while encouraging kids to engage more with their food rather than just shoving it down like so many of us do.

Of course, I know I could do bento boxes if I really wanted to. In fact, I’m tempted to make that a project this coming school year. I don’t even want to think about how early I’d have to get up to do it, or how late I’d have to stay up if I chose to make them the night before. If I do try it, I’ll document my efforts here. And if you’ve tried it (or you routinely make adorable bento boxes for your kids), please give me some tips!

5 thoughts on “Tasty Tuesday: Something to Aspire To”