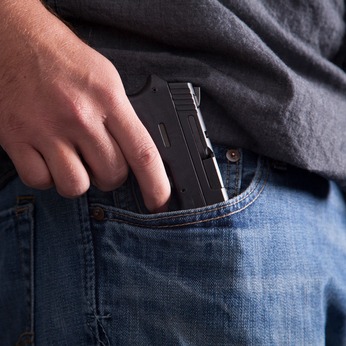 Someone I know, like and respect very much asked me if she could write a few guest posts for this blog. I agreed, because she is a fantastic storyteller and has totally legit reasons for keeping her identity private. So we’re calling her posts “Tales from the Family Crypt.” Read her first post here. Feel free to comment away (anonymously, if you like). — Susan

We are five hours and two states into a family vacation when I see the bulge at my husband’s side. When I saw it I knew. I just couldn’t believe it.

My husband is packing heat on the family vaca.

“Lee, what are you doing with that?!?” I am informed that “It is important to be prepared,” and besides, every state we are travelling in has a concealed carry law. This means that while I was busy packing band aids, lunches, and sunscreen (things we will actually use), my husband was Googling concealed carry laws. I could have f’in strangled him except he gave me that devilish look and turned away happy as a clam.

Oh, excuse me. They are not “guns,” as every drill sergeant will tell you. They are “weapons.” There is a special military punishment for soldiers who get this wrong.

My husband’s love affair with weapons started in the United States military. What do we expect when we send our 17-year-old baby boys (my husband’s age during boot camp) off to be military grade men? There my husband learned to break down and reassemble weapons blindfolded. He had a gift for it. He went to the range and learned he has a gift for that too. When I first met my husband it was a month before I realized he slept with a loaded handgun beside his bed. (Marital compromise #63 – it now rests inside a biometric safe bolted to the wall in our bedroom.)

Several years into marriage, we live America’s weapons debate in our home. With each new school shooting, I say “Guns kill people.” He replies “People kill people.” I concluded “People with guns kills people.” About the only thing we agree upon is that there should be intensive screening for buyers at gun shows.

What I have learned from my husband is this: Americans love their weapons.

It is cultural, going back to “settling the West.” Americans are physically violent. It goes back to “settling the West.”  Certain American communities believe in home grown justice because they feel outside the mainstream and distrust Johnny law. My husband’s family hails from such a community, Appalachian.  In my working-class white neighborhood, I have been stunned to learn that most of my neighbors have either a loaded shotgun in the closet or are “carrying.” 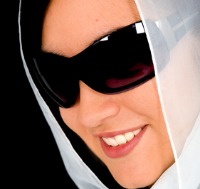 This is most definitely not about logic. So in a world gone weapons crazy I have set before myself one task: to learn how to disarm firearms. Lee thinks this is the lamest strategy he has ever heard but he likes when we go to the range together. When my son is 15, I will teach him the same. With my husband’s assistance, we will succeed.

This mother writes from an undisclosed location in a tiny ranch house with a husband, two children, and no pets. For her day job, she must be unfailingly polite.

3 thoughts on “What’s That in Your Pocket? The Gun Debate Comes Home (Anonymous Guest Post)”