As we gear up for our first WMAG Mother-Daughter Book Club event (June 1, 7 p.m. Google +), I’ve been reading a few other books that deal with some of the same topics in the book we’ll be discussing. THE GIRL GUIDE: FINDING YOUR PLACE IN A MIXED-UP WORLD by Christine Fonseca. A portion of Christine’s book deals with bullying, and I know that’s a huge concern for all parents. 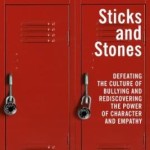 I recently had the chance to read Emily Bazelon’s new book, STICKS AND STONES: DEFEATING THE CULTURE OF BULLYING AND REDISCOVERING THE POWER OF CHARACTER AND EMPATHY. This is a controversial book because it takes a more nuanced look at bullying than many of us are used to seeing these days. One section that has drawn particular ire is about Phoebe Prince, the teen who killed herself after experiencing conflict with several classmates. Those classmates went on trial, and the case drew national attention to the problem of bullying. Bazelon takes a deeper look at some of Phoebe’s personal issues and examines the role she might have played in the conflicts that disturbed her so much. She also takes a decidedly sympathetic view toward one of the girls who was accused of bullying Phoebe Prince to the point of suicide.

Dangerous stuff, huh? I’m not surprised this book has been difficult for readers. But what I do appreciate is that it shows a full appreciation for how complicated relationships among children and teens can be. Although we all know bullying is Wrong with a capital W, situations are not always black and white. One strength of this book is how Bazelon illustrates the more prevalent problem among teens, especially teen girls. It’s called “Drama,” and while it might not always rise to the level of bullying, it can damaging, too. Drama is complicated and tough to deal with. Blanket policies, hard-hitting anti-bullying rules, and often-misguided anti-bullying programs can be ineffective. Bazelon offers some valid suggestions for how we can raise all children to have more empathy and handle conflict better.

I tend to take a nuanced approach to many issues, so I have a nuanced view of this book. I disagree with some of it, I appreciate some of it, and I do think it offers a valid perspective on a painful topic. 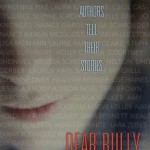 While we’re on the subject of bullying, I can’t help tooting my own horn, and that of my fellow YA authors. When the Phoebe Prince story broke, many of us felt like we wanted to do something to let kids who were being bullied know they weren’t alone. We teamed up to write DEAR BULLY, 70 AUTHORS TELL THEIR STORIES. Published by HarperTeen, the book is a collection of letters, short stories, poetry and other pieces that explore the spectrum of bullying from the perspective of people whose expertise is writing for kids. There are stories by authors who were bullies, memories of being bullied, and ideas for how to deal with bullies. My story is a letter to my teen-aged self. If your daughter is struggling with bullying, share this book with her – I guarantee she’ll find something that speaks to her.

And I guarantee that you will have a great time if you join us June 1 for our Google Hangout with Christine Fonseca. The fun starts at 7 p.m. You can learn more, and join the Hangout on the 1st, right here. We hope to see you then!