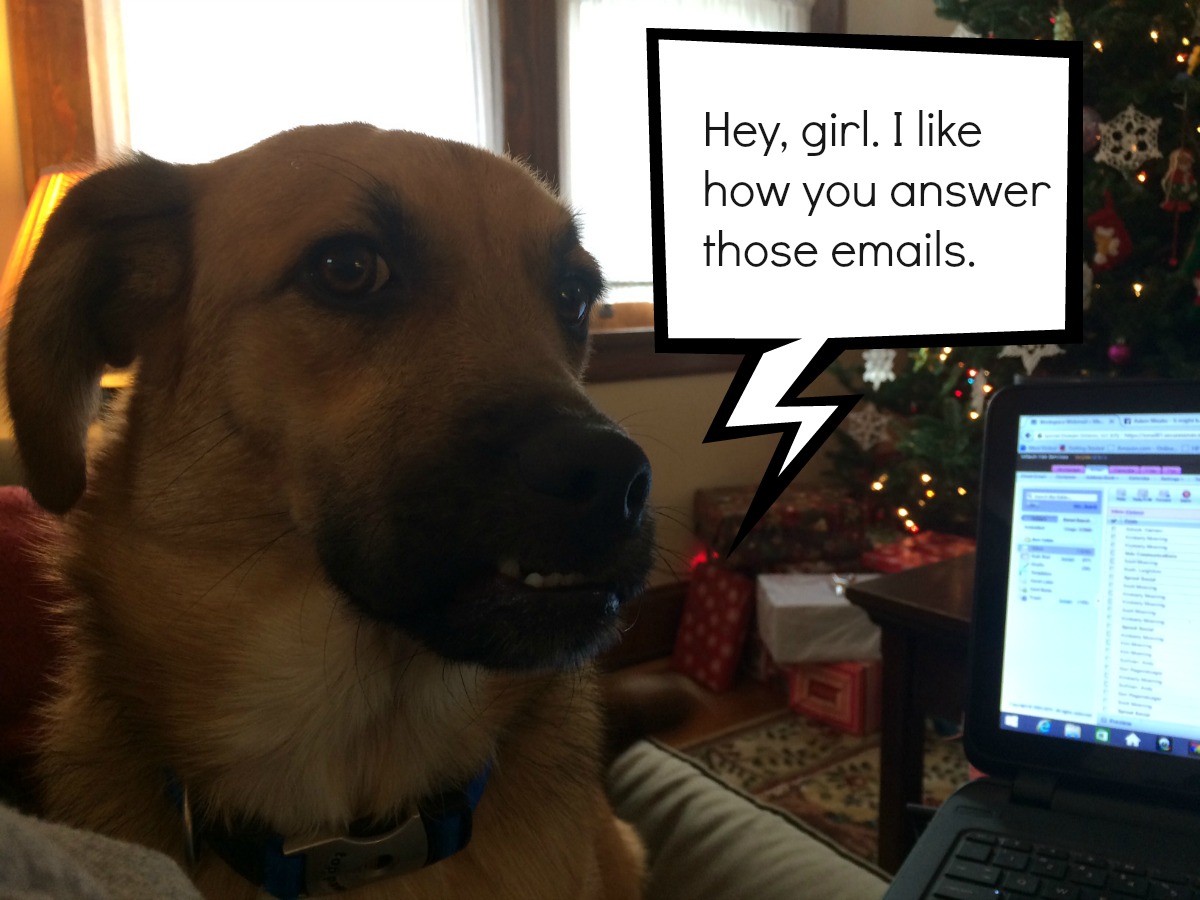 I’ve heard people talk about their pets as if they were children, and although I love my cats to pieces I could never quite relate. Then, we got a dog.

Basically I gave in to my daughters, who had been begging for a puppy. My husband was game, but I was the one to convince because I work from home so much. If I was going to be working from home with a dog in the house, that meant he was pretty much going to be my responsibility, most of the time.

I don’t know what finally made me give in. It’s not like I suddenly felt ready for the added responsibility of a dog during my workday. All I know is that I let my resistance down, and a few days later we were welcoming Foster the shepherd-puggle mix into our family. 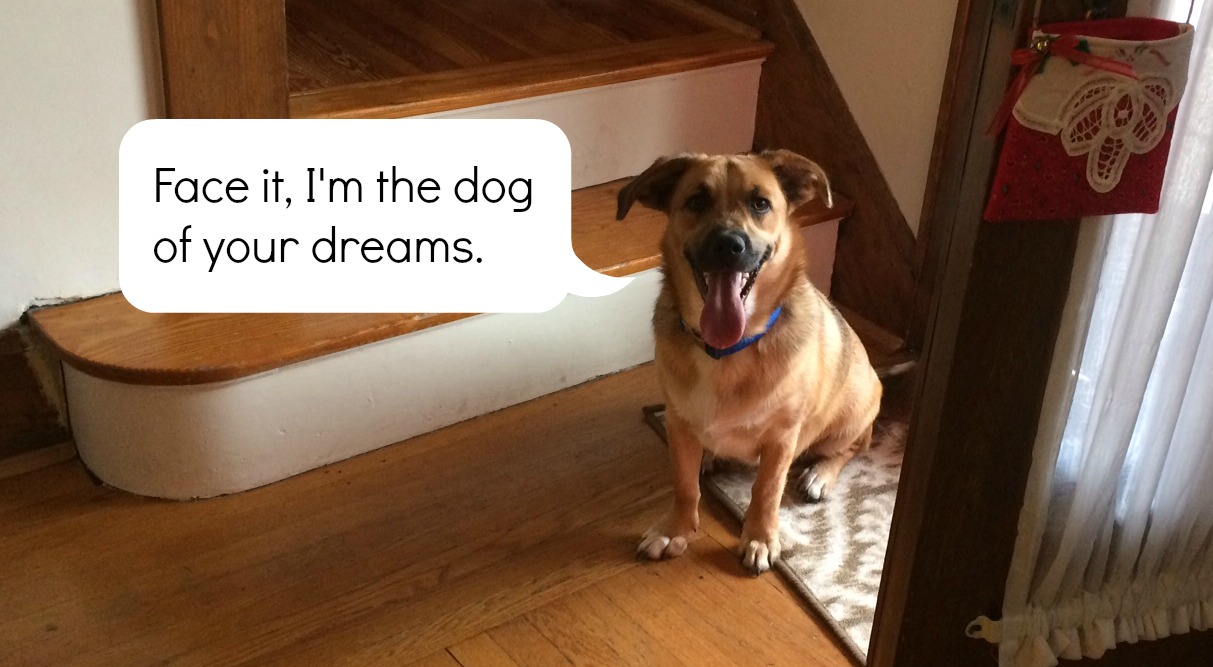 Suddenly I knew what people mean when they call their dogs “Fur Babies.”

First let me say that we got lucky in the puppy department. Foster was already crate trained and about 95% housebroken. He’s a pretty mellow guy—not a lot of yapping and jumping and other crazy puppy behavior. But he requires tons more attention than my cats ever have. He’s like a toddler, albeit an exceptionally well-behaved one.

And so, I found myself figuring out how to juggle work with one more kid. A kid who is always around, literally looking at me with puppy dog eyes.

The first few weeks were a challenge. He kept sneaking up to my girls’ rooms to steal and chew their toys. He’d go days without leaving the yard, prompting me to get lax about putting him out on his leash, then he’d decide to run the neighborhood and ignore me when I called. I had to use the mute button during work calls because he’d wait until meeting times to bark at the cats.

Most of all, he made me feel guilty. 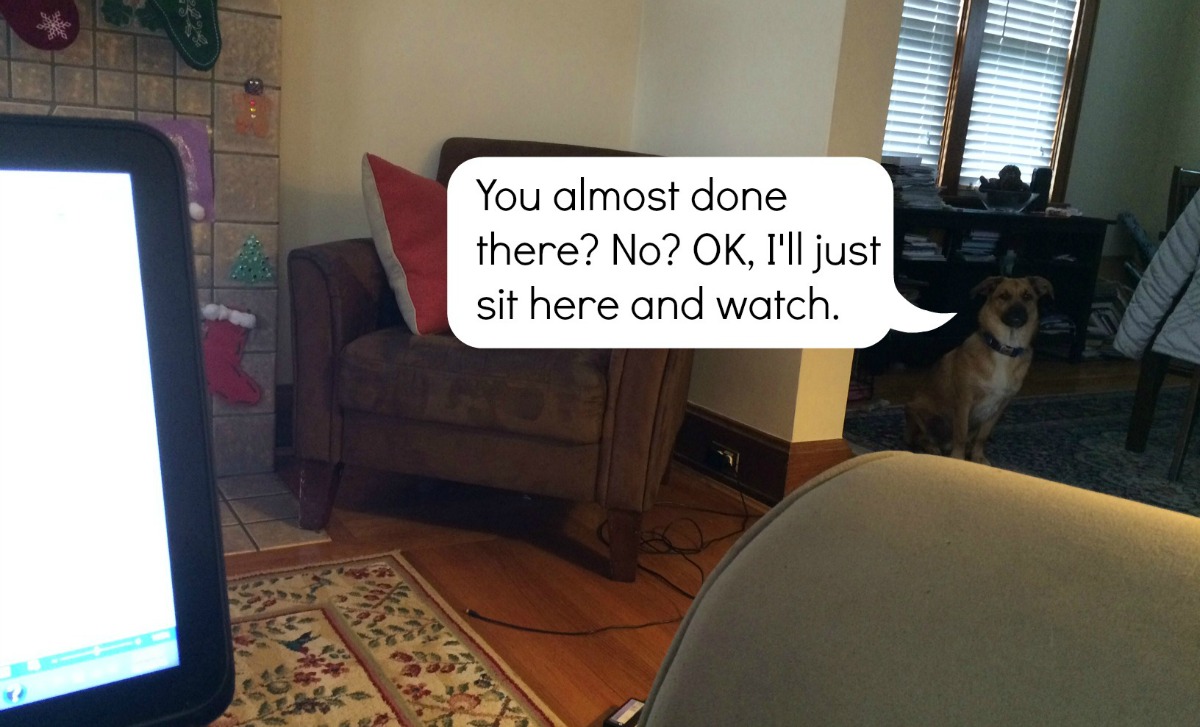 It took me awhile to fall in love with Foster, adorable though he is. He and I had to find a groove. He had to get used to the idea that Mom In the Next Room does not = Mom Available to Play With Me All Day. I had to give in to the guilt every now and then to actually play with the dude.

And you know what? That’s actually helped me do a better job. Getting up every now and then to play Tug-of-War or let him out to pee helps refresh my brain, allowing me work more efficiently and creatively. We take a walk at lunchtime most days, and thanks to his his pent-up energy, I usually end up running. Nothing—not even an expensive gym membership—has been able to get me to do that. 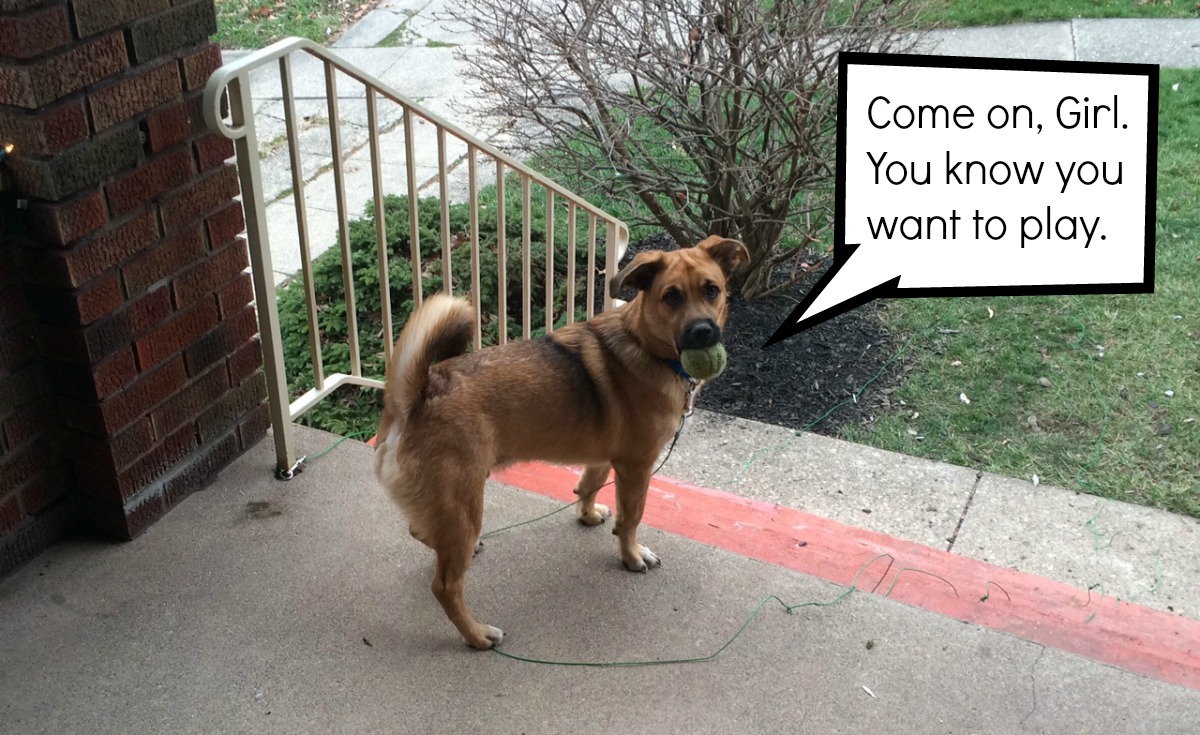 More and more workplaces are letting people bring dogs to the office, and I used to think that was sort of twee and maybe even distracting. But now I see the benefits. Dogs bring a little fun into your day. They get your butt out of your chair. And when Foster curls up to keep me company in the afternoon, it’s pretty darned sweet.

Working from home with a dog around is a lot like trying to work from home with a kid. It can be stressful, especially when I’m swamped and can’t pay much attention to him. But Foster’s a member of the family now, and this working mom is committed to making it work. Who could resist this every day? 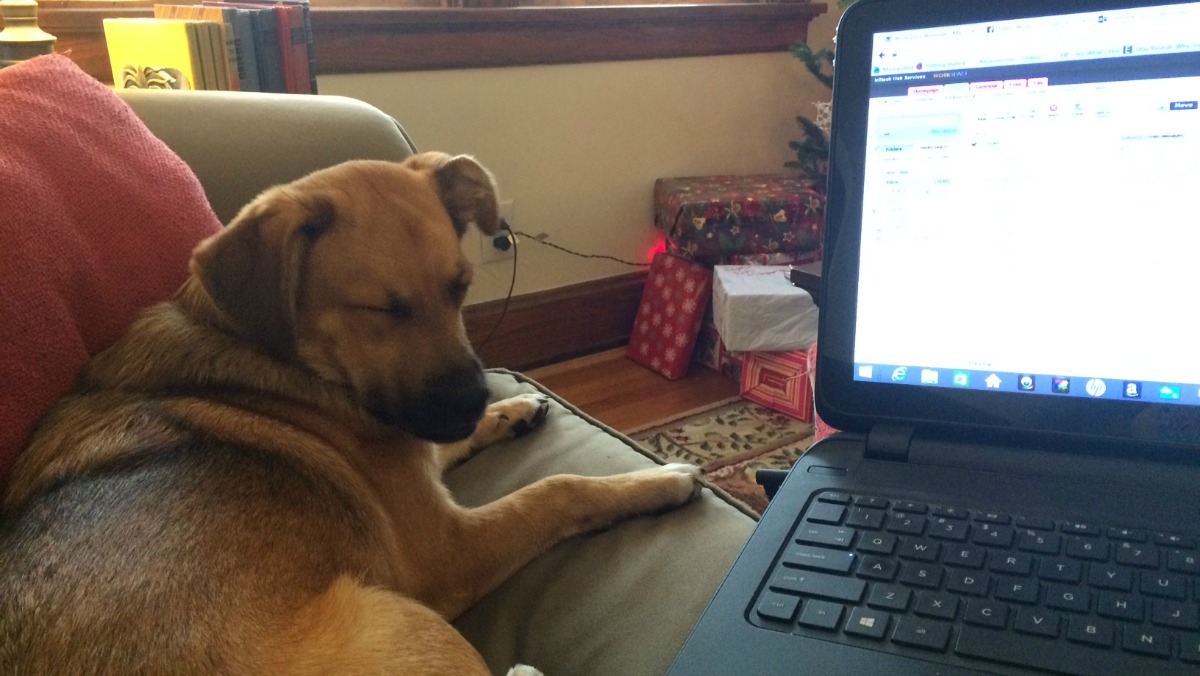 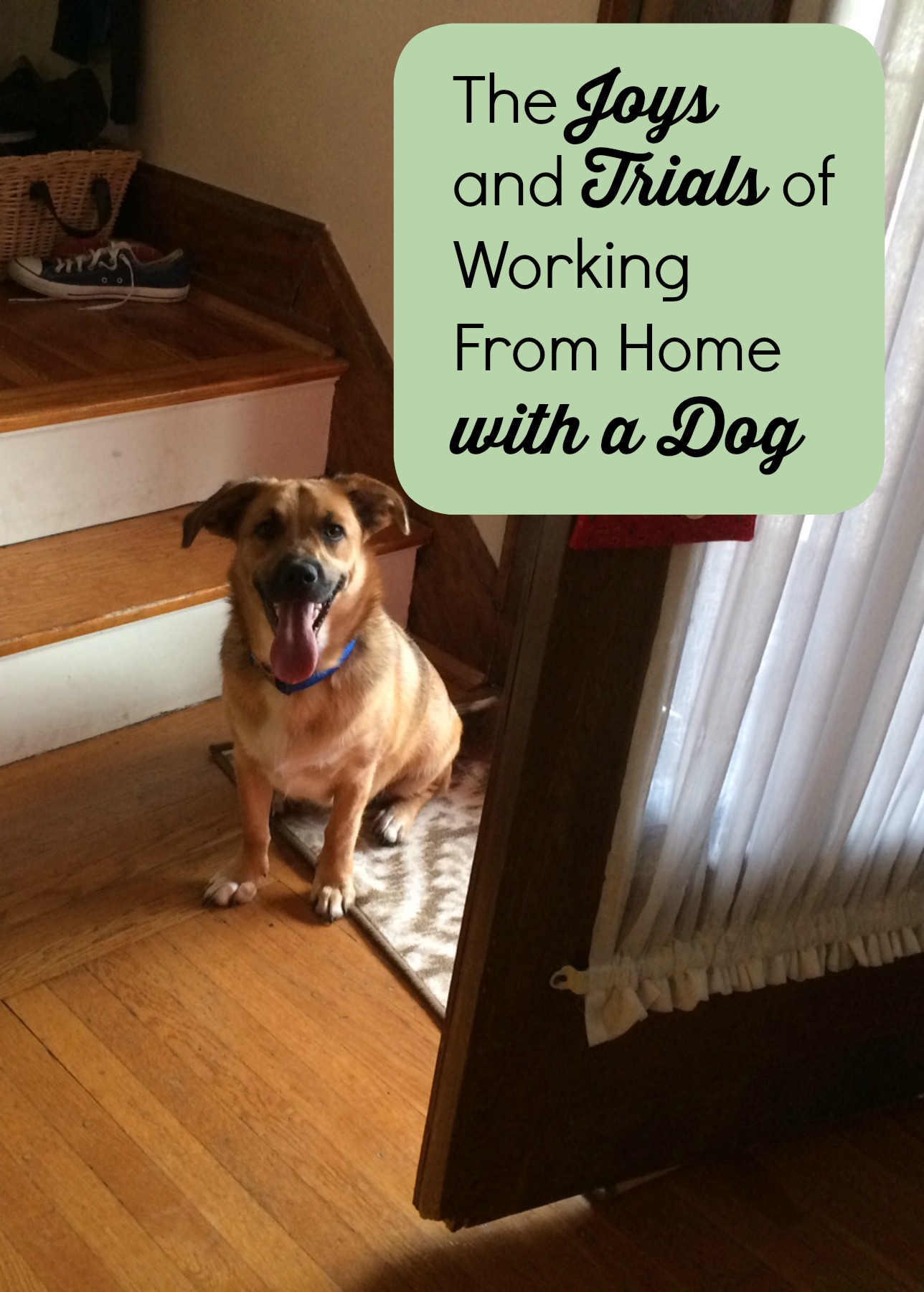 14 thoughts on “Working from Home With a Dog: The Good, the Bad and the Adorable”